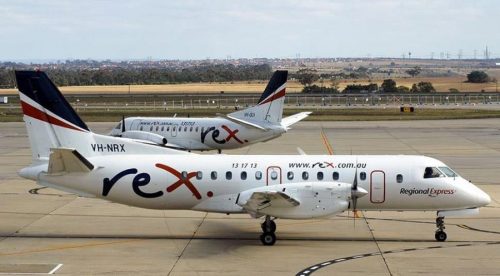 AS the first of the planes took off from the Sydney tarmac bound for Canberra, the public face behind the airline entering the market is promising additional discount fares between Australia’s other major cities.

Rex Airlines has introduced an initial $99 one-way fare on the prize route from the nation’s largest city to its national capital.

But airline deputy chairman John Sharp said Rex plans to offer more affordable flights from Canberra out of Melbourne first and then from Brisbane and Adelaide in the coming months that will remain competitive.

“I can see services beyond just that to other capital cities,” Mr Sharp told ABC Breakfast on Monday (April 19).

“There is a market for Canberra to go to those places and there is also those more leisure routes like Gold Coast, Sunshine Coast and even up to Cairns.”

Mr Sharp said the airline can take on rivals Qantas, Jetstar and Virgin Australia because of a lack of overheads among its war chest of $150 million that has been funded on the back of private equity.

A public policy evaluation from consultancy firm Urbis has predicted the flights to and from Sydney will deliver around $200 million into Canberra’s economy.

“We have been adding a lot of extra services lately and, it’s just a question on how we can digest all of that, I guess,” Mr Sharp said.

Qantas was offering the same route of Sydney to Canberra for more than $300 one way on Monday. But other Rex fares could cost passengers up to $299 in the future.

The initial flight for the expansion of Regional Express Holdings touched down in Canberra shortly before 8am on Monday on its Saab 340 service, which is one of seven return flights each weekday.

The Monday flights coincided on the first day of the Trans-Tasman travel bubble with New Zealand opening up and flights between sister cities Canberra and Wellington set to take off.

Review - May 16, 2021
0
"HOW lucky we are in Canberra to have the opportunity to enjoy such a diversity of musical offerings," writes reviewer IAN McLEAN.