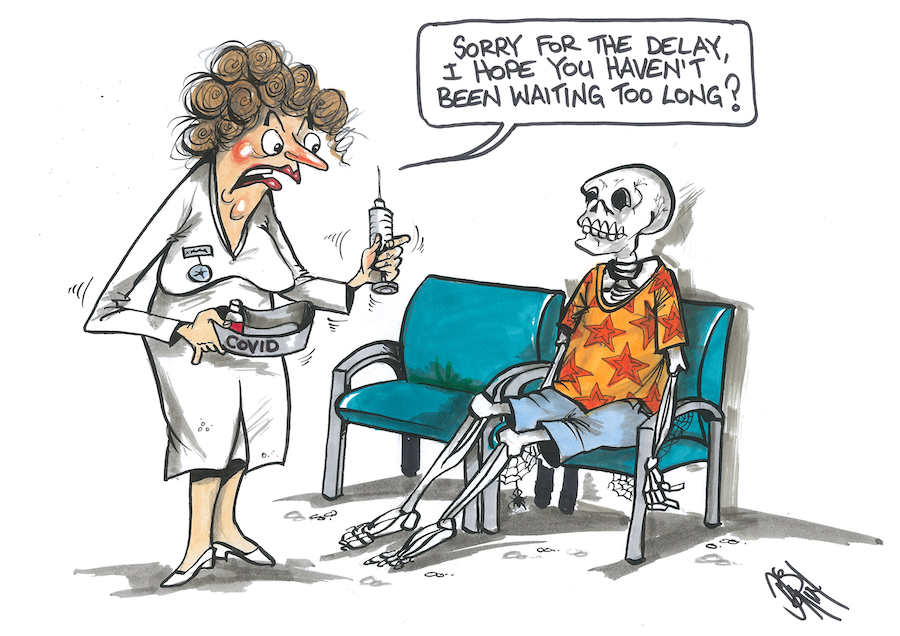 “What really troubles me is that even before I get that second needle AstraZeneca might well be obsolete. There’s absolutely no guarantee that one of these new killer strains won’t have slipped through the borders and run riot in one of our big cities,” writes “The Gadfly” columnist ROBERT MACKLIN.

JUST when we thought the worst of this damnable pandemic was over and we could relax a little, suddenly everything changed – most notably the virus itself.

First came the UK variant, then the South African mutation and now it seems that in Brazil new forms of the virus are replicating themselves like some sci-fi creature from the Amazonian jungles… and who knows what’s brewing in the Congo and all those other sad African communities with barely an ICU bed between them.

A worldwide team of experts has released an analysis that declared: “We are in a race against time to get global transmission low enough to prevent the emergence and spread of new variants. Many countries lack the capacity to track emerging variants via genomic surveillance. This means the situation may be even more serious than it appears.”

All this is happening while the Australian rollout is missing the government’s own expectations by a country mile. And let’s not pretend that the vaccine we’re producing, Oxford University’s AstraZeneca, is in the first rank of resistance weaponry.

When I received my first shot at our local GP’s rooms last week, I was told the vaccination would not be complete until the second was administered on June 29. And even then, my protection would be no more than 73 per cent effective.

“So,” I asked, “what’s my percentage protection now?”

Answer: “It’s better than nothing.”

Not at all happy with that, I persisted. The real answer was not forthcoming, but I did learn something interesting. Our regular annual flu shot offers only half the 73 per cent of the double AstraZeneca vaccination.

I think this was meant to still my fears.

But what really troubles me is that even before I get that second needle AstraZeneca might well be obsolete. There’s absolutely no guarantee that one of these new killer strains that attack younger people especially won’t have slipped through the borders and run riot in one of our big cities. And AZ could well be worthless to combat it.

Sorry if this sounds alarmist. I’m not suggesting that we shouldn’t all get vaccinated with AstraZeneca at the earliest possible moment. The incidence of blood clotting is better than one in 250,000 so is hardly worth considering. And once CSL revs up its Victorian plant to produce a million shots a week and the state and territory governments take over from the feds, the rollout should become more efficient.

However, in the interim the Morrison government has taken a few hits to its approval rating. State leaders have been seriously unimpressed with the feds, though the Queensland Deputy Premier, Steven Miles, went way over the top suggesting that the PM was using it to deflect attention from the Brittany Higgins scandal.

But neither the Nationals’ eponymous Minister Littleproud nor the gossamer Greg Hunt helped matters in their various responses.

But whatever the final wash-up, the timing of the federal election must be weighing heavily on the Morrison mind: go early and risk a women’s backlash; delay and risk a covid catastrophe. Not a simple choice.

For the rest of us, the prospects are pretty bleak wherever we look.