Foxes get a free feed from the ACT taxpayer, Matilda House teases the cops (and the mayor) and we meet the couple with an ice-breaking business card. It’s “Seven Days” with IAN MEIKLE.

I’M not sure feeding endangered eastern bettongs to foxes at $8955.22 apiece is the greatest use of ACT taxpayers’ hard-earned when we have record numbers of homeless people on our streets and a dysfunctional health system all crying out for cash.

But no, Environment Minister Rebecca Vassarotti says the $600,000 trial of releasing 67 of the creatures into the wild was “a success”.

Successful, she says, in achieving its objective to determine whether bettongs could survive in fox-controlled areas. I think I could have told them what would happen for half the price.

Needless to say, the small rat-kangaroos were eaten alive in the Lower Cotter Catchment, where they had been released between 2015 and 2017 as part of the trial.

The Canberra Liberals called the plan “harebrained” when the demise of the bettongs was revealed at an Assembly estimates hearing.

“We know foxes and cats are predators that hunt bettongs so why release bettongs into the wild?” said sparky shadow environment minister Leanne Castley.

“It appears to be an exorbitant amount of money spent on a trial to release bettongs, knowing they will be in peril, counting how many days they will survive.”

Not so, said the minister: “Settling for endangered species to exist behind fences in safe havens is not good enough and does not support the ACT’s long-term vision of re-establishing reintroduced species outside fenced reserves.”

I’m not sure I knew of that particular “vision”, but the trial results found that, in fox-controlled areas, some bettongs survived for more than 450 days – four times longer than similar trials of related species, and bettongs that had a greater body mass tended to survive longer. But clearly, not long enough.

INDIGENOUS leader Matilda House was in fine form at the recent community preview of the Rusten House Art Centre in Queanbeyan.

Arts editor Helen Musa reports that after reminding those present they were on “stolen country”, the Ngambri elder proceeded to lay into a previous Queanbeyan City Council (before it became Queanbeyan Palerang Regional Council) using colourful language to describe what she called the stinginess of former mayor Frank Pangallo’s regime, while praising his successor and incumbent Tim Overall.

Noting the presence of the local constabulary, Matilda welcomed Queanbeyan’s Insp Kevin Price to assist her with a smoking ceremony, but not before she’d said: “You’re not going to arrest me for being cheeky, are you?”

HERE’S another nomination for the list of noisy nosheries. This is from academic wag and “CityNews” columnist Clive Williams: “I nominate D’Browes in Narrabundah. Small rooms and lots of hard surfaces make it too noisy to talk across a table.

“However, the food is very good, particularly the fish pie. It’s a great place for people who are more interested in eating than talking. Ideal for married couples and people who see too much of each other.”

Can’t hear yourself think? Shout out at editor@citynews.com.au 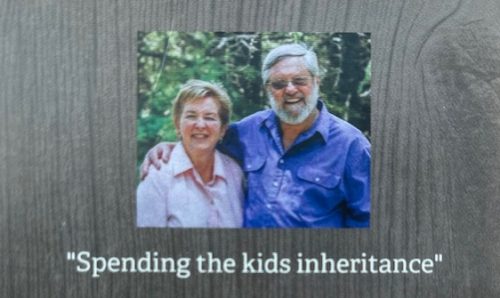 Out on a job, reporter Kathryn Vukovljak was handed a shared business card introducing Martin and Sue Wright. No big whoop, until she turned it over. There’s a smiling photo of the couple and the caption: “Spending the kids inheritance”.

Sue says: “When we give it to people, it’s a real icebreaker as well. Everyone loves it.”

Including her kids. Son Todd Wright, a director of Threesides Marketing, designed it.

“We didn’t see the extra bit until the cards were printed! Is Todd trying to tell us something?” asks Sue.

If he is, Sue, make sure it includes engaging a proofreader (the apostrophe’s missing in kids’).

SPEAKING of communication, this is how Adina Cirson, the Property Council’s ACT executive director, signs off her emails: “We work flexibly at the Property Council. I’m sending this message now because it suits me, but I don’t expect that you will read, respond to or action it outside of regular hours.” No rush to write back then?

AND finally: what’s the difference between a reporter and a journalist? The reporter has one suit, journalist has two. I’m off to count mine.