IN the Botanic Gardens, just after dark, a multi-sensory performance unfolds in the form of “Symbiosis”, another site-specific performance by the Australian Dance Party.

Liz Lea, as wonderfully wacky ranger Ishia Botanist, was our guide for the evening and after reminding everyone to attempt to stay a frond’s length apart, the safely covid-sized gathering began the journey that was to unfold throughout the Gardens. The audience clearly enjoyed Lea’s persona and banter, which she delivered with dramatic flair.

“Symbiosis” unfurled in several vignettes, incorporating dance, music, voice, sound, light, darkness and snippets of information, with the Botanic Gardens themselves being the integral character and inspiration. 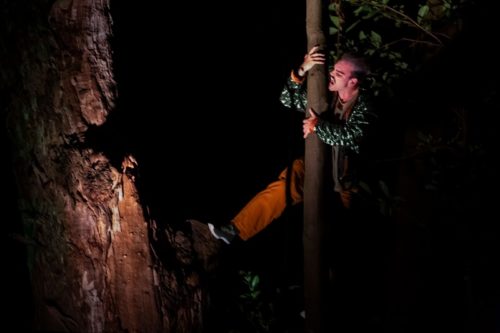 Walking through the rainforest, the group passed dancers, who punctuated the pathway, performing Tai Chi movements with focus on the breath, before they merged in the mist, softly hooting and hissing, where the group left them, ushered on to the next location.

Very quickly, a hyper awareness of all the senses took over – the intense redolence of lemon myrtle, rosemary, the rainforest. And the unmistakable smell of Aeroguard mingled with the crisp evening air.

A solo male dancer, in a sparkly, emerald-green jacket whirled along the rainforest path, glimpsed through the trees, as Melinda Smith delivered a beautifully timed and delivered array of words and whispers: “It all matters. You could help me. We fall, you fall”. The dancer was the forest. The group was moved on again, leaving the dancer convulsing on the side of the path.

Each vignette began with the performer in a state of harmony with its environment, but built to a frenetic pace, leaving them in a state of exhaustion. It felt callous to walk past them as instructed to do.

Every sound became enhanced – the dancers’ breathing, birds and insects in the trees and bushes, a food wrapper quietly rustled by an onlooker, nearby hoons driving past somewhere and a helicopter flying over. The sound of footsteps on bark became a focal point and a sense of meditative contemplation set in.

Despite the overarching premise that humans are causing the disruption to the harmonious existence of these creatures and, indeed, the planet, the delivery of the message was original and multifaceted and remained, for the most part, subtle enough to avoid preaching or blatant accusation.

In the fork of a large tree, another dancer moved softly around the huge trunks to soothing, harmonious music and sounds. Gradually, the sound of traffic and humans crept in, as the dancer noticed the man-made seat next to his tree. Lea then launched into her “scary story” about parasites. 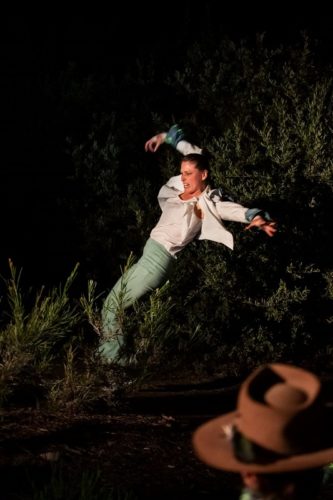 Every dancer portrayed one character, except for ADP leader Alison Plevey, who appeared intermittently on the walkways as a water dragon, then assumed the persona of an automated character from a so-called green company, spruiking the “big picture” benefits of mining and development. This character appeared juxtaposed with the rest of the performers and portrayed a different type of turmoil.

Throughout the performance, the quiet, ubiquitous presence of “The Gardener”, Elizabeth Cameron Dalman OAM was observed. A brilliant addition to the performance was this wonderfully mysterious, timeless peacekeeper.

To conclude the evening, dancers emerged from corners of the Gardens to where The Gardener had created a bark star. She soothed and comforted them, calming and healing the elements they represent – in nature, flora and fauna.

“Symbiosis” is a thoughtful, engaging, multi-sensory experience. An immersive offering with an environmental message, delivered in an aesthetically appealing, interesting manner.

Good night-vision and reasonable agility is definitely preferable for this performance, of which an online film will be available to view.

“Symbiosis” is a beautiful addition to the Enlighten Canberra programme.