WHILE the Greens lick their wounds over the loss of three quarters of their Assembly representation, the only member to be re-elected, Shane Rattenbury, is wrestling with a decision as to which of the two major parties should take government. 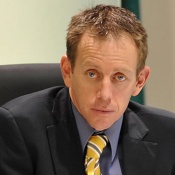 By remaining on the crossbenches, Rattenbury can exercise power at arm’s length from government or he can accept a ministry and have much more impact in delivering on Green principles, philosophy and platform.

There will be recriminations, self-doubt and finger pointing. The poor result for the Greens was more about external factors than their campaign. It does not reflect any kind of poor contribution made in the previous Assembly by the elected MLAs.

As convenor, Meredith Hunter was a good media performer and retained a co-ordinated and directed team. Similarly health spokesperson Amanda Bresnan was a good communicator, committed to the portfolio responsibilities and a hard worker. The increase in support for Caroline Le Couteur at this election reflected the four years of hard work in which she built a strong personal following.

However, the environment is not the issue it was at last election. A decade of drought had thrust climate change in the face of the community and the incumbents around Australia were not responding well to the challenge. Voters saw a need for a shake-up and the Greens presented one way of effectively doing so.

It is not that climate change is any less important – the ramifications for our children and their children’s children are manifest. However, the issue has now been taken seriously enough for governments to have started to respond.

The other major support base for the Greens has been with the socially left. The move from Jon Stanhope to Katy Gallagher was a move in the Labor Government from a non-aligned centralist to a left-aligned leadership. Gallagher’s sense of social justice and her efforts for more equitable outcomes have effectively undermined another possible party platform for the Greens. In this area Greens and Labor policies have simply merged.

The Canberra Liberals’ campaign on rates cannot be underestimated.  While a high proportion of supporters understand and support the Greens’ drive for equity, there is also a strong support base that is focused primarily on plastic bags, climate change, appropriate use of water and other sustainability issues. The latter group may well have been feeling vulnerable on the constant reiteration by the Liberals that a vote for Greens and Labor was a vote to triple rates.

And the rates issue leaves Rattenbury in an untenable position in considering support for Zed Seselja as Chief Minister. Are the Liberals really prepared to back away from their position on the taxation review proposals? Would Shane and the Greens be prepared to allow the Canberra Liberals to block a more equitable taxation system? This fundamental difference in policy seems an insurmountable barrier for both sides – one or other would simply have to sell out on a fundamental position they have just taken to an election.

The other quandary facing Rattenbury is the possibility of accepting an offer of a ministry by Katy Gallagher. There is a successful model established when Kate Carnell appointed me as Australia’s first independent minister. I was not bound by cabinet solidarity on certain matters I had identified where there were fundamental differences of policy. Labor Premier Mike Rann in SA used a similar system, appointing to his cabinet Independent Rory McEwen and National Party minister Karlene Maywald. The Greens in Tasmania have a similar arrangement with Premier Lara Giddings.

Since leaving politics in 2001, I have been asked many times if I exercised more influence holding the balance of power when I was on the cross benches or after I no longer had the balance of power and moved to the front bench as a minister.  My influence and impact as minister (with the ability to differ from the government) far outweighed the former.

Unlike my own experience, Rattenbury is in the enviable position of being able to retain both the balance of power and being able to accept a ministry. It remains to be seen if he will stand up to the naysayers in his own party and really demonstrate what a difference he can make.