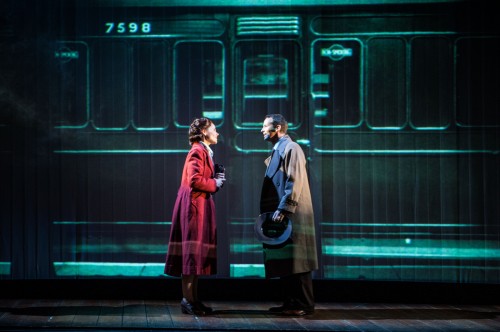 AT a time when many theatrically educated younger people have never heard of Noel Coward, the Canberra Theatre is turning convention on its head and giving us more from this master of wit and emotion.

Last year we had a controversial Aussiefied “Private Lives” packing them in at the Playhouse and now, direct from its opening in Adelaide, comes the international show by London’s Knee High Productions of “Brief Encounter.”

The production, a long-planned return visit to Brink Productions in Adelaide after it took “When the Rain Stops Falling” to the West End, this is no ordinary straight play.

What we’ll see in Canberra involves a striking new concert involving all four elements and a bit of dance thrown into the mix, too.

Knee High has chosen well, for “Brief Encounter” was already a film, made during wartime, adapted from Coward’s 1936 play entitled “Still Life, dealing with a clandestine love affair.

I catch up with Michelle Nightingale by phone to Adelaide as they’re preparing for opening night. She’s just one of two Australians joining the cast under the deal between the two companies for the Australian season in a production for Knee High productions and says this production is British to the bootstraps.

She plays Laura, the housewife who travels to London regularly, meets Alec, a doctor, in the refreshment room of a fictional railway station and experiences the rapid blossoming of forbidden love.

Without doubt, says Nightingale, Coward intended Laura and Alec’s love as a metaphor for the love forbidden to him as a gay man living in Britain in the 1930s.

They’ve already done three previews in Adelaide which she reports were “very well-received.”

Of course, she observes, with the approval of the Noel Coward Foundation it’s already passed the tougher test from a body that notoriously guards the purity of its product. Phew.

But of all the elements, Nightingale especially relishes the beauty of the language in the play, which revolves around three relationships – Laura and Alec’s forbidden love, the “naive love” of Beryl the tea room waitress and Stanley the cake seller, and the “old love” of Myrtle the tea room manageress and Albert the station master.

“I’m not looking for someone else”, she says, “Mine is an unusual relationship for its time, when people married for life, she says, “it was very controversial for people to have other relationships.”

For much of the play, therefore, Laura and Alec are questioning themselves as to which way to go, eventually choosing the path that is “right.”

In that decision, Coward reveals himself as not all that unconventional. “My character finds new strength,” Nightingale concludes, “it’s the best part to play.”

“Brief Encounter”, by Knee High Theatre and Brink Productions, adapted from Noël Coward’s “Still Life” and “Brief Encounter” with additional verse and lyrics by Coward, at The Playhouse, October 2-5, bookings to 6275 2700 and canberratheatrecentre.com.au