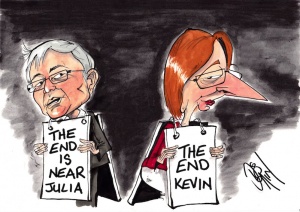 THE Gillard Labor Government has failed miserably to understand the workings of minority government.

It has failed to understand the importance of fighting the good fight and, where necessary, going down screaming.

In a minority government it is not necessary to win each piece of legislation. For example, Communications Minister Stephen Conroy gave up on his last four media bills.

He should have lost on the floor of the parliament. Instead of looking like wimps, Labor could have gone on the attack accusing the Liberals and independents of being too reliant on the media moguls who were opposed to the legislation.

From the time Kevin Rudd backed down on the carbon tax and super profits tax on mining, Labor has looked weak.

Who wants to support a party that will not stand up for the principles on which they were elected? Labor needed the Greens and the independents. However, it has compromised to such an extent that it appears to have compromised principles.

And yet, it has managed to get mountains of legislation through the parliament through hard work, difficult negotiations, compromise and persuasiveness despite an Opposition that has largely played a negative, blocking game.

There are those who believe that Labor may still rise from the ashes of the last day of the last sitting week.

It is not impossible but even though things can change rapidly in politics, a phoenix-like resurrection is certainly looking increasingly unlikely.

Opposition Leader Tony Abbott would have us believe that the problem for the Labor Government is simply incompetence – particularly with regard to financial management. He argues that Labor committed itself to a surplus and has failed to deliver and therefore asserts the Australian economy is in dire straits and is managed poorly.

On the same day that Labor was imploding Paola Tatoro, of the UK “Guardian”, was identifying what a mob of whingers Australians have become. She pointed out that while Australia has experienced 21 straight years of economic growth, the rest of the world “lurches from crises to economic crises”. There is more to our economy than a surplus.

With Labor in chaos, the Liberals have been able to appeal to the greed of ordinary Australians, somehow persuading a majority of us that we could be much better off with a change of government. Under conservative governments worldwide the norm is that the discrepancy between the rich and the poor grows.

Tatoro goes on to suggest that “yet another political attack against Australia’s leader smacks of a particular strain of antipodean madness”. After all, she points out that the Liberal Party has tried four different leaders in just six years, while in the past 10 years the Labor Party has dispatched five of its leaders.

The confusion between presidential style politics that the major parties have adopted has come back to bite them. As discussed a few weeks ago, some leaders pretend to be elected by the people, believe their own rhetoric and then squawk when there is enough dissatisfaction within the parliament for their Westminster colleagues to remove them.

Other leaders accept the charade and have stepped down with grace – but not Kevin Rudd. Can his latest commitment to never stand for Prime Minister again really be believed?

Former Labor leader, Mark Latham, launched a scathing attack on Rudd and his acolytes on Sydney radio station 2UE, arguing that Rudd “has the dregs of the Labor movement with him” and “we should be better than that”.

A run of those “dregs” has now stood down as Ministers, leaving Julia Gillard to revamp her cabinet in an attempt to re-establish solidarity. Lack of solidarity and unity, even within cabinet, has been a key element in the implosion of Labor.

No party can expect to do well in an election when it fails to sell good economic credentials, present as unprincipled and lacking in unity. But “a week is a long time in politics” and Labor has until mid-September.