HOW does a fashion designer end up behind the counter of a newly opened “gourmet take away/dine-in” on busy Lonsdale Street?

Sara Poguet, who launched a collection under her label Mec and the Maid at Fashfest, is the fashion designer. It’s fascinating that her focus has changed from models and makeup to Chez Frederic, but why not? Who am I to question the creative mind?

The original Chez Frederic was opened by (and is named after) Sara’s father on WA’s Cottesloe Beach. When Sara moved here she never lost sight of how ‘Frederic’s Place’ could add value to Canberra’s dining scene.

To enjoy Chez Frederic you have to understand the concept. This is not fine dining. It’s casual dining – no-fuss, no-mess. Sara greets you with a smile. The menu, written on the wall behind the order counter, with specials written to the left on bolts of brown paper, forms part of the interior design.

So does the wine list on the wall to your right.

Sara says the concept is to keep overheads low and pass resulting savings to the customer. So there is pre-packaged, eco-friendly disposable wooden cutlery and the food is served in aluminium

containers. Initially you drank wine from jam jars but, due to customer feedback, these have been replaced with wine glasses. You can take away or eat at one of the marble communal tables.

I like Chez Frederic’s décor, lighting fixtures, collection of black and white photos and silver ladles holding tea candles, which form an art piece. Frederic himself had just arrived in Canberra on our visit and was already stuck into cooking in the kitchen.

So what’s to eat? Hearty, home-style dishes (around $13.50 to $22). Luscious lamb shanks. Tasty ribs. Handmade pasta. And herbivores can order dishes like eggplant parmigiana ($17) and spinach and ricotta ravioli ($15). If you don’t finish your meal just pop a lid on your container and take it home.

The pork spare ribs, marinated in honey and plum sauce, were finger lickin’ good and the meat fell off the bone. The creamy, buttery mash is the best I’ve had in ages. My favourite pasta was the duck ravioli ($18.50). We also sampled spinach and chicken fagottini and penne with smoked trout, cherry tomatoes and lemon.

My bet is that Chez Frederic will do well having identified a niche in this food-booming area for quick, tasty food, served fast.

On improvements, I’d like to see salads available and handy napkins on the tables (the small, thin pre-packaged ones couldn’t cope with my sticky rib fingers). The raw wooden bench seats, while comfy, are rough and can catch your clothes. And, although wanting to keep costs down, Chez Frederic’s may want to invest in wine coolers. 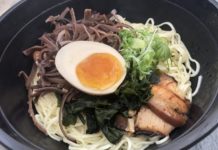