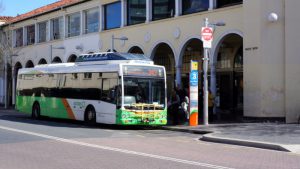 TERRITORY And Municipal Services has announced new fares for travel on ACTION buses will come into effect early in the New Year.

“From Saturday 2 January 2016, MyWay fares for ACTION buses will increase by a maximum of 2.5% with cash fares increasing between 10 and 20 cents,” Public Transport Director Ian McGlinn, said.

“ACTION continues to offer a highly competitive alternative for passengers travelling to and from work.

“ACTION customers using MyWay to catch the bus to and from work during peak hour will continue to be almost $200 a month better off than those who choose to drive and pay for parking in the CBD.”

Mr McGlinn stated that despite this modest increase, fares for ACTION buses remain amongst the cheapest in the country.

“A trip from Gungahlin to the City during peak times is only $2.98 when paying with MyWay. A similar journey, over 12 kilometres, can cost between $3.50 and $4.50 in other jurisdictions.”

The gull list of fares is online at action.act.gov.au