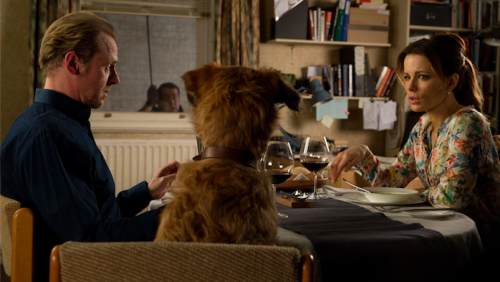 SEVERAL light millennia out there, a giant coelenterate houses a quartet of ugly lawmakers (voiced by the surviving Monty Pythons) who have judged planet Earth as unworthy to continue to exist. But the law requires that an inhabitant must be tested to confirm that destruction is appropriate.

The chosen tester is teacher Neil (Simon Pegg) who lives opposite Catherine (Kate Beckinsale), whom he dearly wishes would notice him. Neil personifies feckless. The film chronicles the consequences of his getting the power to make whatever he wishes happen simply by saying it and waving his hand. The possibilities are infinite.

Terry Jones’ film, co-written with Gavin Scott, exemplifies the well-worn adage about the dangers inherent in getting what you wish for. Since 1996, after “Monty Python and the Holy Grail”, “Life of Brian”, “Meaning of Life”, “Eric the Viking” and “Wind in the Willows”, Jones has been making TV episodes, documentaries and video games. Welcome back, Terry. Us big-screen aficionados have missed you.

Reflecting H.G. Wells’ “The Man who Could Work Miracles”, “Absolutely Anything” is deliciously silly, improbable beyond belief, funny both ha-ha and peculiar, gently didactic and frustratingly stupid (which is not the same as silly). It makes good use of Simon Pegg without Nick Frost who played his buddy in most of the films that boosted Pegg’s reputation.

CityNews - July 7, 2020
0
There are exemptions for Victorians to come into the ACT but there must be an "exceptional need", according to Chief Minister Andrew Barr.