“SANTA, Baby” is the name of a short season coming up at the Courtyard Studio in which audiences can see a set of short Christmas plays written by Canberra playwrights – and yes, it’s also the title of a famous Christmas song by Eartha Kitt that begins with the words, “Santa baby, slip a sable under the tree for me”. 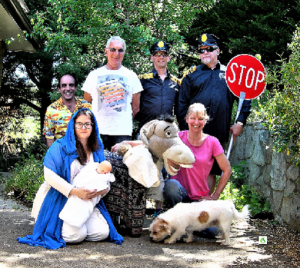 This all proves to be no accident, for the commissioning company, Budding Theatre, knowing how silly the silly season can be, stipulated that each of the 10 minute plays to be staged must be inspired by Christmas songs.

There’ll be plenty of familiar faces from Canberra’s short play world and amongst the performers and playwrights a there will be a welcome return of director Domenic Mico, who will be staging “Mother and Child” by Kate Roediger.

Roediger reimagines the story of Jesus’ birth in the context of contemporary politics in her play, while Greg Gould details a post-Christmas party STI check in his comedy “Statistically Speaking”.

Company director Kirsty Budding depicts fashion-conscious reindeer trying to win Santa’s heart in “Reindeer in Red”, which is also showing in her kids’ show “The Night before Christmas”.

Finally Bronwyn Vanzino explores Christmas isolation and kindness in “Xmas Is What You Make It” and Judith Peterson depicts God on a book tour in “Not What You Expected”.

Oh yes, Santa and the angels will open and close the show with a song and will entertain audiences in the foyer with kisses and maybe even time on Santa’s knee.

Profits will be donated to wildlife conservation charity, The Thin Green Line Foundation.

“Santa, Baby”, at the Courtyard Studio, Canberra Theatre Centre, 8pm, December 16 and 17 only, bookings to canberratheatrecentre.com.au or 6275 2700.