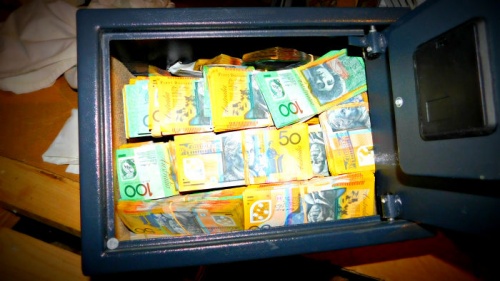 Over a six week period, ACT Policing executed 46 warrants resulting in ten people facing the ACT Magistrates Court on charges including trafficking in controlled drugs and dealing in the proceeds of crime. A number of additional persons will be summonsed for drug-related offences. As part of the operation, one man was extradited to New South Wales to face a charge of murder.

Over the operation, ACT Policing seized almost three kilograms of illicit drugs, with a combined potential street value of over $640,000. Two residences and seven vehicles valued at over $1.8 million and in excess of $600,000 in cash were restrained by police as proceeds of crime.

Police also located a ‘grow house’ in Fraser, seizing 55 cannabis plants and hydroponic systems, with a street value of over $275,000.

Detective Acting Superintendent Marcus Boorman said it was an excellent result for both ACT Policing and the ACT community.

“We would like to thank the members of the public who have assisted us in our operational activities. Since the beginning of the Dob in a Dealer campaign, ACT Policing has received a substantial amount of information from the public relating to illicit drugs.

“It is your community, you know when suspicious activity is happening in your neighbourhood and when something is out of place,” said Detective Acting Superintendent Boorman.

“These results are the direct outcome of information from the community, and the hard work by ACT Policing’s Criminal Investigations, Community Safety and General Duties members.

“ACT Policing has zero tolerance towards the supply of illicit drugs. Our message is simple, if you are a manufacturer, distributor or trafficker of illicit drugs, we are targeting you, knocking on your door, seizing your assets and putting you before court,” said Detective Acting Superintendent Boorman.

“The Dob in a Dealer campaign is continuing, and we are still calling on the community to provide information to Crime Stoppers. Every piece of information is important.

“If you have any information on the manufacturing or dealing of illicit drugs you can contact Crime Stoppers on 1800 333 000 or report via the ACT Crime Stoppers website. Rewards of up to $1000 may apply, information can be provided anonymously,” Mr Roach said.

Sponsored Content - June 4, 2020
0
Sponsored content from a valued advertiser. WITH Dr Carmelo Bonanno, the original owner of Dentistry at Karabar, back in the clinic, there have been changes...