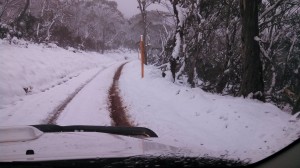 THE ACT Government is asking motorists and other road users to be aware of inclement weather and snowfall predicted across the ACT tomorrow, especially in the morning.

“The predicted snowfall is likely to see an impact on our roads, so I urge motorists, cyclists and pedestrians to be vigilant and exercise caution,” Acting Director, Roads ACT Ken Marshall, said.

“The roads may be slippery or icy, even if there is no snow. Some road closures may need to be put in place so please obey any signage or traffic marshals.

“Affected areas are likely to include rural regions of the ACT but also sections of Canberra itself.

“The snowfall may also result in the closures of parks and reserves, including sections of Namadgi National Park and Tidbinbilla Nature Reserve.

“In anticipation of the forecasted snow the Mount Franklin Road has been closed at Piccadilly Circus, along with Two Sticks Road within Brindabella National Park. Both roads will remain closed until further notice.

“The ACT Government will work to ensure the public is kept informed of closures and updates relating to the predicted snowfall.”