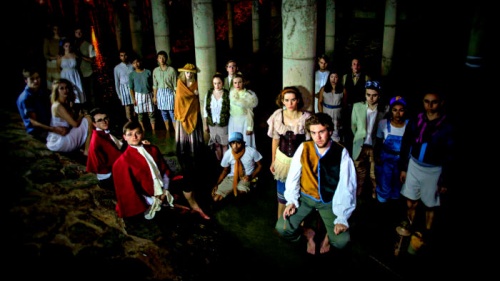 ANU Interhall’s production of Stephen Sondheim’s “Sweeney Todd” is a brilliant example of what can be achieved in musical theatre by an imaginative director with the ability to inspire a hard-working enthusiastic cast and creative team, despite the constraints of an obviously limited production budget.

By tackling Sondheim’s complex masterpiece for her first musical theatre directorial effort, director, Gowrie Varma, had set herself a formidable challenge. “Sweeney Todd” demands excellent actors with fine singing voices, as well as clever staging, if it is to do justice to the challenging score, and macabre storyline. It says much for this production, that so many of those inherent challenges are so successfully accomplished.

For this production Varma has designed a striking, adaptable setting of huge golden organ pipes, in which she confidently manipulates her actors and ensemble in bold and concisely choreographed movement sequences for heightened dramatic effect.

Most importantly she has teamed with talented musical director Katrina Tang, who has assembled, and conducts, a magnificent thirty-piece orchestra to do justice to Sondheim’s remarkable, atmospheric score.

Set in 19th century London, “Sweeney Todd” details the return of Botany Bay escapee, Benjamin Barker, who having been transported for life after being falsely convicted by the corrupt Judge Turpin, escapes to return and search for his wife, Lucy, and daughter, Joanna.

Discovering that his family is either dead or captive, Barker assumes the name of Sweeney Todd, and forms a liaison with the cunning and manipulative, Mrs Lovett, to set up a barber shop above her bakery, from where he embarks on a terrifying path of murder and revenge.

Spencer Cliff gives an effective performance as Sweeney Todd, delivering his spoken dialogue in a cold, flat voice, with eyes distant, and using his commanding presence and fine baritone voice to excellent effect to instil a growing sense of dread in his audience.

He is well matched by an appealing performance from Georgie Juszczyk, as his willing partner-in-crime, Mrs Lovett. Juszczyk nails her difficult first solo, “The Worst Pies in London” with aplomb, later lifting the mood with the clever duet with Todd, “A Little Priest”, then successfully capturing Mrs Lovett’s growing unease with Todd’s response in their later duet, “By the Sea”.

Colin Balog, though cast against type as the corrupt Judge Turpin, also impresses with his ability to successfully convey the Judge’s suppressed sexuality behind a façade of reserved dignity. His superbly sung interpretation of the flagellation song, “”Johanna (Mea Culpa)”, so unnerved his audience that they forgot to clap at the end.

No such trouble for Cameron Allan with his delightfully detailed comic interpretation of Turpin’s servant, Beadle Bamford, or for Will Collett and Amy Jenkins, who both sang beautifully and acted with conviction as the thwarted lovers Anthony and Johanna.

Costumes play an import role in indicating the status and personality of the characters, and while budget considerations were no doubt a consideration, Nell Fraser’s deliberately ambiguous costume designs were very “curate’s egg”. The decision to costume of the charlatan, Adolpho Pirelli as a sort of Victorian Frank N Furter, destroyed Jeremy Hoskins chances of creating a creditable character. And even though she sang prettily, Sachini Poogoda needed much more help from wardrobe and make-up to be convincing as Tobias Ragg, and as a result, the poignancy of her duet with Mrs Lovett, “Not While I’m Around” was squandered.

But overall, there is so much to relish in this absorbing production that anyone with even a passing interest in the work of Stephen Sondheim, would be mad to miss the opportunity to experience this ambitious staging by ANU Interhall Productions.

Michelle Grattan - November 20, 2020
0
For many Australians, looking back on a history of war heroism, it will be hard to take in what the investigation by Justice Paul Brereton has found, writes political columnist MICHELLE GRATTAN.