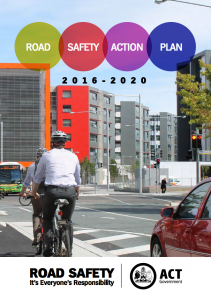 “Vision Zero means zero deaths on ACT roads. We are still some way off achieving this goal; last year we lost 15 lives on ACT roads and 122 people have died over the past 10 years,” Shane said.

“But zero deaths is realistic and achievable if we can improve the safety and culture on our roads. We cannot accept that road deaths are an inevitable part of our transport system.

“Speed management, vulnerable road users, impaired and dangerous driving, young and novice drivers and driver distraction are key areas of focus for the Government in saving lives and reducing injuries.

“Several actions in the new Road Safety Action Plan relate to younger drivers and children. These include piloting safety improvements at schools, reviewing and improving the Graduated Driver Licensing scheme, and restricting the use of mobile phones and other technologies when novice drivers are behind the wheel.

“The mobile phone restriction follows other jurisdictions, including NSW, which have already banned the learner and provisional drivers using mobile phones while driving, including via blue tooth.

“It’s illegal for any driver to hold and use a mobile phone while driving, but we’re also proposing to increase penalties for texting while driving. It is perhaps the most dangerous form of driver distraction.”

“The Government will also expand its ‘Share the Road’ campaign – which promotes safe interaction between cars, cyclists and pedestrians – and will change driving training to ensure novice drivers are taught and tested about vulnerable road users.

“As a related measure we will engage an expert to investigate and assess the risk of allowing people to ride bicycles without helmets in low speed environments such as parks and shared zones. This is in response to research which shows more people would ride if wearing helmets was optional – and when more people ride, overall safety for riders improves.

Other action items include:

“Our road safety policies will prioritise human life and health. In line with these policies I am also asking Canberra drivers to slow down and be responsible and careful. Vision Zero is an outcome the community and the Government will achieve together,” Mr Rattenbury concluded.

A full copy of the plan can be found at justice.act.gov.au