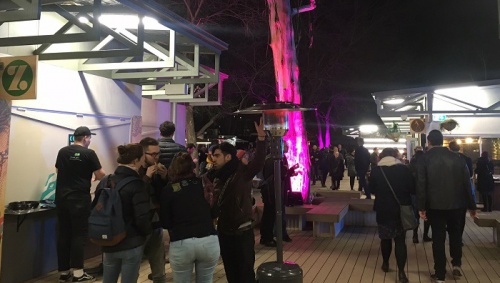 AS Brian Schmidt, the Vice Chancellor of the Australian National University, launched the ANU Pop-Up Reunion Village on campus last night (July 11) it was obvious that demountables aren’t what they used to be.

Gone are the days of rickety huts. The “Village”, located just behind the Family Law Courts and close to the Street Theatre, is a state-of-the-art mini town, with coffee shops, stalls providing various cuisines, the relocated ANU pharmacy, and a large bar/performance space capable of seating over 400 people or 700 if you consider standing room.

It’s supposed to last for 18 months while six new buildings in a car park are constructed on campus but it looks as if it could last a lot longer than that.

Project manager of the village, Steve Turner from Sydney, told “CityNews” that the bar licensee was permitted to serve 1700 people if you take in the large elegant deck area from which the various shops emanate.

Turner said he believed that the village, intended to be the hub of social life on the campus while constructions proceeded. He said it would come alive at about 6.30am each morning and, unless there were special functions, run till about 9pm each night.

Last night the joint was jumping as ANU students and quite a few staff sampled the free food on offer and danced the night away to the sounds of local Latin band Los Chavos. 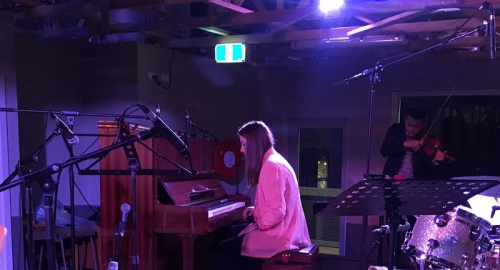 Inside what jazz host Geoff Page called “the church hall” but ANU staff preferred to dub “the club,” young jazz musicians were warming up in preparation for a “the inaugural” Jazz concert at the village featuring celebrated Sax player and innovators Sandy Evans and her band.

It augured well for the circumstances that had saddened so many arts lovers – the demise of the ANU Bar, ANU Arts Centre, The Gods and Teatro Vivaldi. 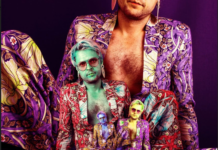