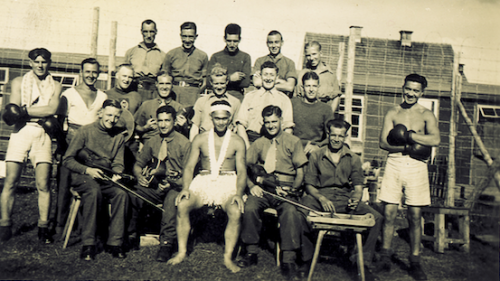 “CITYNEWS” theatre writer Joe Woodward is off to Austria to present his play “Violine” as a reading in Wolfsberg, near the location of the former prison camp featured in the play, where his real-life father Jack was interned. Swedish professional actor, Pontus Olgrim, who was in the original 2003 production at The Street Theatre, will join Woodward for the reading in late July.

AINSLIE and Gorman Arts Centres are turning on an arty winter party, “Canberra Obscura: Metropolis” and billing it as “a night of enthralling performance and emphatic beats, experimentation and the unexpected.” Main Hall, Ainslie Arts Centre, Elouera Street, Braddon from 7pm on Friday, July 28. Bookings to agac.com.au or tickets at the door.

THE Childers Group and the Cultural Facilities Corporation are getting together to present the “Arts Value” forum, which will look at what the arts do for us. After a keynote address by cultural strategist and Australia Council board member Kate Fielding there’ll be discussion groups linking arts with health, the economy and social identity. Canberra Theatre Centre, 12.30pm-6pm, July 26. Bookings to eventbrite.com.au

STAND-UP comic and storyteller Damian Callinan is busy researching the “town folk” of Queanbeyan, where he and filmmaker John Cherry will capture local identities on camera then combine the clips with onstage interactions to create a one-off original show for The Q on August 19. Prospective survey participants should visit surveymonkey.com/r/YQY7YQZ

ART Song Canberra has two former Canberra operatic stars, soprano Sonia Anfiloff and her husband, baritone Ben Connor, with Alan Hicks at the piano, performing songs by Barber, Wolf, Fauré and Tchaikovsky that are linked by the poetic imagery of the four natural elements. At Wesley Music Centre, 3pm, Sunday, July 23. Tickets only at the door.