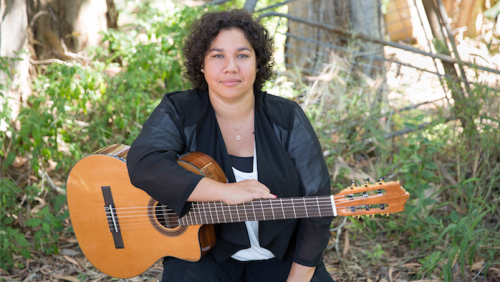 WHEN Aboriginal and Torres Strait Islander musician Jessie Lloyd arrived at the National Library of Australia to take up her 2017 Folk Fellowship Award, she hardly knew where or how to look.

“I’m not an academic,” she tells “CityNews” of having to confront the library’s extensive oral history collection to look for original songs from Christian missions – “the mish” – written between 1900 and 1999. Luckily there were plenty of experienced people at the library to give her a hand and she says: “It’s been awesome for me in getting first-hand assistance from the NLA and other researchers.”

In fact, as library staff have pointed out to us, Lloyd had also been the recipient of the State Library of Victoria’s Creative Fellowship Award last year, but had found herself somewhat at sea there.

Not for long. The founder and CEO of organisations such as Songlines Aboriginal Music in Melbourne and South West Aboriginal Entertainment in Perth is nothing if not motivated.

Lloyd studied at Melbourne Business School in 2015 and says: “I love business, it’s really fun developing strategies… most artists like to have a producer or a manager, but I like to do it myself.”

Canberrans will have a chance to see Lloyd at the National Folk Festival this year, where she will talk about her studies and, with a small band, perform selections from her CD, “The Songs Back Home”, which focuses on music from Christian missions, state-run settlements and native camps where Aboriginal and Torres Strait Islander people were relocated.

For those of a secular frame of mind, Lloyd says most of her mission songs are not religious and she’s noticed a strong difference between her mission songs and African-American spirituals, saying: “There’s so much optimism and hope and resilience here, and a lot of humour”.

She has also identified around 40-50 “mission songs” from all around Australia about day-to-day life that deal with love, heartbreak, food, travelling, seafaring and working on luggers and stock routes.

“100 years is a lot of time to cover, but rediscovering them has been really cool,” Lloyd says.

A favourite song is set at the Moree baths, made notorious during Charlie Perkins’ 1965 freedom ride.

Before the library fellowship Lloyd respectfully consulted senior song men and song women as she travelled all around the country.

Once deep in the NLA’s oral history collection, she found that white Australia has its song men and song women, too, in the form of the library’s designated interviewers. Many of them, she says approvingly, are musicians themselves.

It turned out that there were few commercial recordings before the 1980s, so her only option was to listen to endless hours of recorded interviews in which the oral historian would often ask: “Would you sing that for us?” thus providing invaluable documentation of that song.

She’s already tried her material out on an audience in Sydney, an experience she describes as “amazing… people were curious and they were connecting to the music”.

One audience member who originally came from Palm Island and had lived in Sydney for 30 years recognised some of the songs and pointed out some style differences.

“There is an older way of singing,” she discovered.

It’s the same with the words.

“In what they call Torres Strait Creole, there are lots of words we don’t use anymore and the old Queensland way of pronouncing the word ‘watery’ would be “watry,” not ‘wa-ter-ry’.”

Lloyd is from North Queensland but the songs are not just from that region but from every state except SA, ironically one of the 2017 Festival’s focus states this year, but she’ll get to them.

The National Folk Festival 2017, Exhibition Park, April 13-17. Jessie Lloyd and her band appear at The Lyric, 6pm on Friday, April 14, with the main concert at the Budawang Pavilion, 1.30pm on Sunday, April 16. Lloyd will present the results of her mission songs research in the Trocadero at 11.20am on Saturday, April 15. Bookings to folkfestival.org.au or tickets at the gate.

Sponsored Content - April 14, 2021
1
Passionate about recycling, ACT Skip Hire, the longest-running skip bin hire business in Canberra, has a strong focus on waste reduction. This is a sponsored post.