Such was the main message of the masterclass in which three young piano students put themselves in front of Poblocka and an audience for two hours of in-depth analysis, criticism and teaching.

Poblocka listened patiently and asked the students how they saw the pieces. The sonata student thought it melancholy. Poblocka thought it anything but. Then she would take them through selected passages, sometimes focusing on a single bar or phrase for five or 10 minutes, getting the student to create just the right nuance.

When playing a mazurka, Poblocka’s advice was to play it like a mazurka – a Polish folk dance – play it so that it sings sweetly (she even has written song lyrics into manuscript she has studied) or flows like a gliding ballerina.

It was amazing how a single bar of music or even a solitary note can be played in so many ways.

“When practising, play the pieces, especially the fast passages, slow”.

Other advice was to play the hands separately, listen to the sound of the music, get to know the composer’s style, know the audience’s mind.

Important advice was to leave the theatrics out of classical piano playing. Poblocka reminded students that the body’s energy should go through the fingers to create the music; it should not get lost through flapping elbows and arching shoulders. Good advice, personified in her own recital performance a week earlier.

Poblocka’s masterclass, like her recital, was a revelation. The students took much away and will have even more to practice. It’s no wonder concert pianists spend hours practising just one phrase. 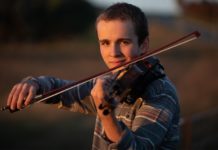