THE Australian National Botanic Gardens is going wild with “Dinosaurs in the Gardens” until Saturday, July 16. They’ll be life-sized dinosaurs to be spotted and a free self-guided walk with a map is available from the Visitor Centre. The search begins from 5.30pm to 8pm on Saturday, July 15, where there will be a “Dino- stampede”. (Friday is sold out) Bookings to close at 6pm, July 13 via register.eventarc.com/38716/dino-stampede-saturday-15-july

FOUR Winds in Bermagui ventures into arts politics when Justin Macdonnell talks about “Chaos Theory and The Arts” at the Windsong Pavilion, Four Winds Road, Bermagui, 5.30pm–7pm, Thursday, July 6. Bookings to fourwinds.com.au or 6493 3414.

The Salt Room is a popular bi-monthly poetry performance night that mixes performance and storytelling to showcase some of the brightest sparks in Canberra’s poetry scene. Gorman Arts Centre, Main Hall, 7.30pm-10.30pm, Friday, July 7. Bookings to agac.com.au or tickets at the door.

CASP is an annual small grants program administered by Regional Arts NSW on behalf of Create NSW Arts and Health. Its focus is on arts and the environment, Aboriginal and Torres Strait Islander projects, culturally and linguistically diverse projects and projects by children or young people. CASP grant writing workshops are open to applicants at southerntablelandsarts.com.au until 5pm on Thursday, July 27.

ACTING For the Fun of It presents “The Living Text” – “From Page to Stage”, a six week course for adults (including Year 12 drama students). Thursdays from 7pm-9pm, July 20 to August 24. All inquiries to course tutor, Peter Wilkins at peterwilkins@grapevine.com.au or 0408 034373. CIT Adult Short courses are held every first weekend of the month all year round at Canberra Glassworks. Costs apply and to find out more, email education@canberraglassworks.com.au

STUDIOMAP is conducting a winter school holiday art workshop featuring Pokémon Art, Manga art and general illustration for children and teens. The workshop is suitable for children aged six through to teenagers at all levels, such as beginners, intermediate and advanced. At M16 Artspace Griffith, two hours daily, from 3pm-5pm, Monday, July 3 to Thursday, July 6. Fees apply. Bookings to studiomap.com.au

LINDY Hume will lead a creative collaboration forum at the Windsong Pavilion, Four Winds Road, Bermagui, from 2pm–5pm, Thursday, July 6. The event starts with performances by Stonewave Taiko and the Djaadjawan Dancers. Registrations to southeastarts.eventbrite.com.au or call 6492 0711.

KIRSTY Budding’s venture the Canberra Youth Talent show is back for its second year, giving a stage to talented children and young people between ages six and 19. It will be running at the Belconnen Community Theatre all day on Saturday, August 12. There will be prizes awarded by guest judges and by audience vote. Registration and audition video are due by July 15 to submissions@buddingtheatre.com

PIGEONHOLE Theatre’s production “Playhouse Creatures”, seen at The Q last year, has been invited as the only Australian representative at the Mondial du Theatre in Monaco in August. It’s time to chip in and help director Jordan Best and her all-star Canberra cast get there via the crowdfunding site, australianculturalfund.org.au

M16’s Writer in Residence Program 2017 is a supported residency for emerging writers with an interest in the arts. To apply submit an example of your arts writing (review, essay, etc.) no longer than 1000 words and a CV by 5pm, Friday, July 28 to marketing@m16artspace.com

CANBERRA-based Halstead Press has just published Joy Eadie’s new book, “Discovering Charles Meere”, which presents a fresh perspective on the artist who painted the Australian Beach Pattern. With a preface by Edmund Capon, Eadie’s book explores how one of the most recognisable Australian images became infinitely more famous than its painter.

FORTY original artworks from the never-before-seen CBCA Children’s Book Week collection can be seen in the Clive Price Suite, Building 1, University of Canberra, from 10am to 2pm, Monday to Friday from July 10 to August 30.

ALISON Plevey and the Australian Dance Party need your vote for a Bendigo Bank community grant to help them create a full length work in 2017. Voting to facebook.com/canberracommunitybankbranches/ or directly by email to Chloe.Heath@bendigoadelaide.com.au

“BOOK Heroes on the Screen” program returns to the National Film and Sound Archive these school holidays. There are recent blockbusters like “Beauty and the Beast” and nostalgic classics like “The Neverending Story”. Sessions begin at 11am and the program runs until July 14 at the Arc cinema, NFSA, Acton. Bookings to nfsa.gov.au

ALSO the NFSA will host Australian composer Jen Anderson and her string quartet for a live score accompaniment to the 1929 film “Pandora’s Box”, at Arc cinema, NFSA, Acton. From 7pm, Friday, July 7. Bookings to nfsa.gov.au

DEAN Bourne is Australia’s longest-running Roy Orbison tribute artist and is marking his 20th year anniversary playing Orbison. He’ll be at the Southern Cross Club in Woden at 8pm on July 8 performing hits like “Pretty Woman”, “Crying” and “Dream Baby”. Bookings to cscc.com.au or 6283 7200.

SHOEB Ahmad is launching his new single, “mask-ed” at Gorman Arts Centre: Ralph Wilson Theatre, Saturday, July 8, from 6.30pm-8pm. Bookings to eventbrite.com.au or at the door.

CHILD Players ACT, is staging a play, “Charlie and the Chocolate Factory”, based on the story by Roald Dahl at theatre@bcs, Belconnen Community Centre, Swanson Court, Belconnen until July 15. Bookings to canberrarep.org.a, 6257 1950 or at the door. 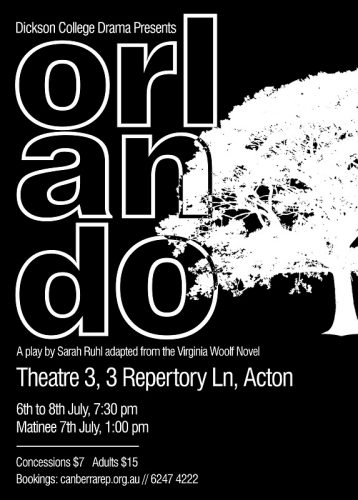 THE Dickson Drama production of “Orlando”, a play by Sarah Ruhl, which was adapted from the Virginia Woolf novel, will feature some of the ACT’s finest young performers. At Theatre 3, repertory Lane, Acton, July 6-8. Bookings to canberrarep.org.au or 6247 4222.

ROALD Dahl’s “Jack and the Beanstalk” is a family musical staged by Pied Piper Productions that gives a young, enthusiastic cast the opportunity to strut their stuff on stage. Director Nina Stevenson says the very affordable ticket price is a plus for large families looking to be entertained during the July school holidays. The musical will be held at St Paul’s Anglican Church Hall, Manuka, from July 6 and 7. Tickets can be bought at the door for $7.

A RARE collection, which features 52 portraits of British street people will be on display for the first time in “Dempsey’s People: a folio of British street portraits 1824-1844”. Curated by David Hansen, the exhibition will bring together 51 works painted by little-known itinerant portraitist, John Dempsey who was first brought to light by Dr Hansen when he was senior curator at Tasmanian Museum and Gallery. The collection will be at the National Portrait Gallery, King Edward Terrace, Parkes, from 10am–5pm daily, July 7 to October 22.

NANCY Sever Gallery has scored a coup in getting an exhibition by the reclusive but celebrated Canberra artist, Elisabeth Kruger, whose exhibition of recent works, “The Sea Paintings”, can be seen at the gallery, which is located on 4/6 Kennedy Street, Kingston. The exhibition will be on from Wednesday to Sunday, 11am–6pm until August 6.

THE Queanbeyan Palerang Regional Council Art Competition show continues at the Queanbeyan Art Society Gallery, under the Queanbeyan River Bridge, until the end of July. 109 works are on show in the gallery and the winners were announced by Tim Overall last weekend. The Queanbeyan Riverside Plaza management has also given the Art Society the use of the window on Monaro Street to exhibit members art works, which are all for sale.

PHOTOACCESS has two exhibitions in the Huw Davies Gallery as part of its Indigenous Photomedia Artists Program, including: “They Blew Up the Hospital I was Born in”, by Dean Cross, to coincide with the 20th anniversary of the Royal Canberra Hospital implosion and; “Mill Binna” by Leah and Duncan King Smith, who use still and moving images, sounds, objects and light. At Manuka Arts Centre, on the corner of Manuka Circle and New South Wales Crescent, Griffith to July 16.

M16 Artspace at 21 Blaxland Crescent, Griffith has four new exhibitions opening at 6pm on Thursday, July 6. The exhibitions are: “Figurative Visions: Three Artists; Three Mediums”, by Roger Beale, Rick Cochrane and Chan Dissanyake; “Liminal Landscapes” by Amandeep Kaur, who experiments with digital photomontages that have layers of deliberately constructed liminal spaces in which the concept of the self is explored; “Skating on Thin Ice”, oil paintings interspersed with black and white photos by Keith Bailey; and in the Chutespace, “Timeframe” by Kerry Shepherdson. All shows run Wednesday to Sunday from 12pm-5pm until July 23.

“INSPIRED at Strathnairn” is a culmination of works from art group, “The Gumnuts”, exploring a myriad of technique, colour and medium. The exhibition features works that have been inspired by Strathnairn and its surroundings in a variety of mediums. At Strathnairn Arts, 90 Stockdill Drive, Holt, 10am-4pm, until July 9.

BELCONNEN Arts Centre has scored quite a coup in its July triple treat of exhibitions; “Feast: indulgence, savouring and delectation”, an exhibition by artists from Illawarra Association for the Visual Arts (IAVA), “The 2016 Doug Moran National Portrait Prize Finalists Exhibition” and “Traits”, by Georgia-Rae Byrne-Jameson.

ARTWORK from Warnayaka Art Centre, Lajamanu, which is in the Tanami Desert 580kms south west of Katherine, NT, can be seen at East Hotel, Kingston, until July 8. These are contemporary paintings from Telstra National Aboriginal and Torres Strait Islander Awards finalists Lily Hargraves, Molly Napurrurla Tasman and Rosie Napurrurla Tasman as well as a selection of other artists. All works are for sale.

MEREDITH Hinchliffe has curated an online exhibition of work by tapestry exponent Belinda Ramson, who died in 2014. This exhibition was mounted at the American Tapestry Alliance, visit americantapestryalliance.org/exhibitions/tex_ata/belinda-ramson/

“THIS is not a place” is an exhibition by Canberra artist Clare Jackson of etchings explore personal experience through depictions of reminiscent yet constructed places. The show opens at Megalo Print Studio + Gallery, 21 Wentworth Avenue, Kingston, from 6pm, Thursday, July 6, and runs until July 22.

THE Canberra Centre has now unveiled the first in a specially-commissioned series of large-scale murals, including an artwork based on the theme of the artwork series, “Beauty Redefined” created in Australian artist Nick Thomm’s photo-realistic style which utilises bright, psychedelic colours in a mixed-media format.

WATSON Art Centre’s 2017 Student/ Teacher exhibition is now open. The annual exhibition is an opportunity to celebrate work created by many of the students who attend pottery classes at Canberra Potters, and the teachers who share with them their skills and love of clay. In the gallery at Aspinall Street, Watson until July 9, open 10am-4pm, Thursday to Sunday.

“KIRSTIE Rea: the land”, a 20-year survey of works by one of Canberra’s most famous glass creators, has been chosen for the reopening of the Canberra Museum and Gallery. The show runs to August 20.

Danielle Nohra - August 5, 2020
0
Nearly 20 years ago the ACT government signed an agreement to accommodate Aboriginal input into the management of Namadgi National Park, but it never happened, reports DANIELLE NOHRA.