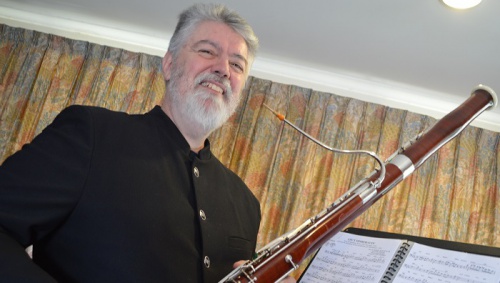 A WILD and wacky recital is coming up tomorrow (October 21) at Wesley Music Centre when veteran bassoonist David Whitbread unveils “even more things you shouldn’t do on a bassoon”.

This will be Whitbread’s third and, he says, last solo bassoon recital in a series he started three years ago, where the bassoon takes the lead over a set of professional backing tapes.

“Not that music has been exhausted, because it’s stolen from other instrumentalists and vocalists, there is plenty left to plunder,” he asserts, “works written or performed by Puccini, Mozart, Handel and Zac Efron… and Broadway songs and TV themes from shows like ‘Wicked’ and ‘Poirot’ and many others.”

Remarkably, he says, they all sound better on a bassoon.

Whitbread has played bassoon in Canberra’s Aeolus Wind Trio for more than 30 years and in various orchestras, operas, ballets and shows, as well as being a founding member of the Canberra Wind Symphony over the last three years.

The first “Things you shouldn’t do on a bassoon” recital in 2014 saw a capacity crowd and some patrons turned away. The second recital in 2015 included country-western bassoon and disco, as well as some unlikely pizzicato and circus music.

With an all-new program, this third and final recital includes a featured work where the bassoon plays all the characters in an unnamed Broadway musical that features a baker, his wife, Little Red Riding Hood, Jack the Giant Killer, two princes and a witch.

“With backing tapes from rock bands, jazz combos, piano accompanists, swing bands, pipe organists and full orchestras, it is an unusual program – and I think it’s safe to say people will not have heard a bassoon playing any of this music before,” Whitbread says.

“Even more things you shouldn’t do on a bassoon”, Wesley Music Centre, 2pm, Saturday, October 21. Entry by donation of a note at the door from 1.30pm, but be early, doors will be locked at capacity. All proceeds will go to StreetSwags.org

Wendy Johnson - February 19, 2020
0
"Market Grill celebrates quality produce in all that it does. It's lucky to be able to pick from Pialligo Estate’s two-hectare market garden that thrives on the banks of the Molonglo River," says dining reviewer WENDY JOHNSON