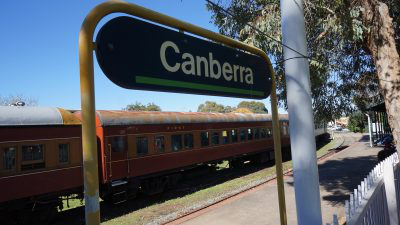 WHILE the Canberra Railway Museum spirals into liquidation, two local directors have made a “generous bid” to keep the community’s heritage in the ACT.

Directors of the Capital Holdings Group, Ian Oliver and Dallas Dogger see this as an opportunity to say “thank you” to the Canberra community by giving something during a critical time.

Ian Oliver says: “We are completing our due diligence and research with the cooperation of the liquidator from Deloitte, Eddie Senatore. We understand from Mr Senatore that other Canberra business people may be willing to help as well and we are open to a collaborative approach that can protect the assets for future generations.”

“Of course, the liquidator will make the final decision and we have told him we are willing to ‘cut a cheque’ to achieve the best result for all involved. There is no guarantee that our offer will be accepted,” he says.

“We want to see prompt action to stop the debt growing and save our community’s heritage by developing arrangements which prevent a collapse happening again.

“There are groups and private bidders in Australia and overseas expressing interest in purchasing, then removing key elements of our community’s story to other regions or private properties. We don’t want to see this happen when we have so little heritage left in Canberra. The experience of steam train travel has been preserved so well in the national capital and it should continue.”

Mr Oliver and Mr Dogger have discussed their plans to fund a rescue the Canberra Railway Museum with the ACT government and say there is bipartisan support for a heritage operation.

Garry Reynolds, who worked as a volunteer at the Canberra Railways Museum says it was fortunate that Mr Oliver and Mr Dallas made an offer and hope it is taken up.

The not-for-profit Australian Railway Historical Society (ACT) is currently in the process of liquidation and many of Canberra’s heritage treasures will be up for auction on August 2.

0
DOUGAL MACDONALD reviews a mystery drama movie that turns out to be a homage to horror and mystery novelist Shirley Jackson, who may have by now faded from the memories of all but her most devoted aficionados.