“There comes a time in the affairs of a person when they must take the bull by the tail and face the situation.”

WC Fields would have been at home at Tipsy Bull and chuckled at how this relatively new eatery does everything a bit tipsy. Like the three-martini lunch with four plates for $75 (Wednesday to Sunday) that would certainly make me tipsy.

Tipsy Bull is located where the Schnitzel House lived its brief Braddon life. It’s a pretty big space (indoors and outdoors) and the food, staff say, is “friendly, fine-ish dining”.

Certainly dishes are designed to share with tapas plates dished up large and small. For some tipsy faves order up the six-course chef’s selection ($65 per head).

We were there for lunch and my two friends had dug in because I was tied up. Even though I arrived at the tail end, it was “no sweat”. Staff happily ensured I caught up.

The Betel Bites ($4.50 each) caught our eye. We adore caramelised pork belly and this sat pretty on a bright green betel leaf. It was served with crunchy cashew nuts, chilli and tangy lime. Our only comment was the lack of chilli, which would have balanced the sweetness of the pork. My friend mentioned this to staff who said Tipsy Bull caters to the “lowest common denominator”. We get that some like it hot and some not, but you need to taste the chilli.

The crispy spiced squid ($16), served with creamy lemon garlic aioli, was cooked well and yummy. The fresh kingfish was a major hit ($24), even though one friend was hesitant, feeling that kingfish can be bland. It wasn’t, thanks to the avo, cucumber kimchi and tapioca cracker. It’s a dish with a difference.

I was starving when I arrived and indulged in the 52? Tasmanian sous vide cooked salmon ($22) from the large plates. The dish was delish. The salmon was succulent and the sweet eel glaze drizzled on top added flavour and colour. The sushi rice was perfectly sticky and the pickled onions added texture.

The menu at Tipsy Bull has variety but we were challenged to describe its overall personality, even though we pinpointed Asian, European and Australian characteristics.

Tipsy Bull is happy if you want to stay a bit or much longer, perhaps enticed with their creative cocktails (more than 80 types of pretty specky gin are available). Let the good times roll.

Tipsy Bull has a pretty laid-back atmosphere. The service was great and staff didn’t hesitate to accommodate. 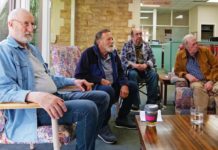 Jon Stanhope - October 19, 2020
14
"If the Liberal Party doesn't find some way to form an alliance with a credible territory-wide minor party or high-profile and electable independents then it's highly likely the Labor/Greens coalition will govern for many years to come," writes columnist JON STANHOPE.