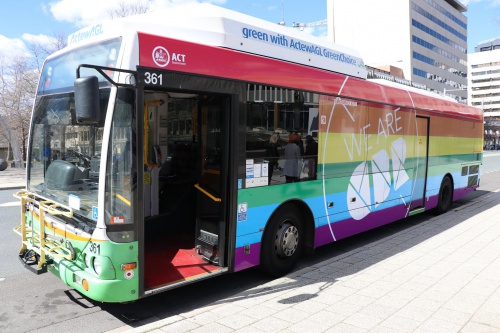 THE ACT government’s marriage equality campaign has decorated Canberra’s streets following the release of two Transport Canberra buses, which have been wrapped in rainbows.

“We have specially wrapped these two buses in ‘We are CBR’ rainbows as part of the ACT government’s ongoing support for the rights of the LGBTIQ community,” says Minister for Transport and City Services Meegan Fitzharris.

The buses follow Chief Minister Andrew Barr announcement over a week ago (August 17), saying the ACT government will provide additional support to Canberra’s LGBTIQ community during the Federal Government’s postal survey, as well as join and actively participate in the campaign to achieve marriage equality in Australia.

The Canberra Liberals reacted to the campaign with Leader of the Opposition Alistair Coe saying the use of taxpayers’ funds to advocate for either side of this debate is wrong and is disrespectful to the diversity of views in the community.

“The ACT government has a long-standing commitment to equality – a commitment that is even more important right now in the context of the Federal Government’s divisive and non-binding voluntary postal survey on Marriage Equality,” Ms Fitzharris says.

“The ACT government made a strong commitment earlier this month to provide extra support to the LGBTIQ community to help them through this difficult time. Most of this is in the form of increased support to LGBTIQ-focussed support organisations and mental health networks.

“But these newly-wrapped buses – covered by Transport Canberra’s existing promotional arrangements – will serve not only to further reinforce where our government stands on equality, but also as a reminder to all LGBTIQ Canberrans that we stand with you and support you.”

The two buses will be on the road for about three months, and will form part of a range of activities in support of the LGBTIQ community.