FREDERICK Knott’s stupendously popular thriller, “Wait until Dark”, is living proof that this is one of the hardest theatrical genres to master, but that has never daunted Canberra REP. 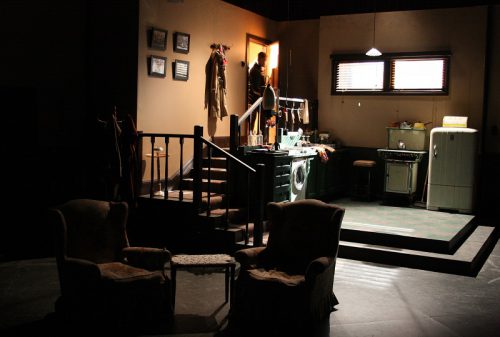 Director of the production, Jordan Best, says the play will take audiences to “the dark and unexpected” and as the title suggests, this is one play where the word “dark” can be taken literally.

While Best told “Citynews” that there were, “in a sense, two plays”, the terrifying plot hangs on the premise that the murderous villains who invade Susy’s house have no idea just how well a blind person can see.

What Best meant was that the play allows the mostly sighted audience to enjoy the comfort of thinking their world is in control and then, when the lights go out, they are invited into Susy’s dark world.

Jenna Roberts, who hasn’t been short of great parts for REP, has been offered the role of a lifetime as Susy, and she’s been studying hard. Armed with a doctorate from the ANU that has nothing to do with sight impairment, Roberts has been busy studying the actions and psychology of blind people in order to give veracity to her role and above all, to make sure that she is not patronising in her approach.

Both Best and Roberts agree that people often talk down to blind people, misunderstanding their mastery of space, sound and sensations. In a short scene performed for “Citynews”, the mixture of fear and humour is seen when one of the villains, played by Nelson Blattman, tries to outwit Susy as he moves towards a washing machine – but she knows exactly what he’s doing and where he is.

Roberts has been watching YouTube postings of blind people, and in particular a woman who makes her way around her kitchen effortlessly. At the same time, she says, it has to be recognised that blind people do move somewhat differently from those who are sighted and she’s trying to get just the right balance.

Although originally located by playwright Knott in Greenwich Village, the setting chosen for this production is in the kitchen of a London flat during the 1950s, realised magnificently by set designer Michael Sparks and the REP construction team, with authentic stove, props and colours to fit.

“There are 100 million props in this production,” Best complains. “I usually get rid of all props in my shows, but in this one I can’t.”

Luckily she’s been provided with an ace backstage team.

So, they agree, while incredibly hard to perform – so much depends on the timing and the accuracy of movement – this is been an exciting show to work on, a kind of game, but one that can be expected to terrify audiences, especially in the final scene.

“Wait until Dark,” directed by Jordan Best for Canberra REP, at Theatre 3, 3 Repertory Lane, Acton, February 24 to March 11. Wednesday to Saturday 8pm.  Bookings to canberrarep.org.au or 6257 1950.