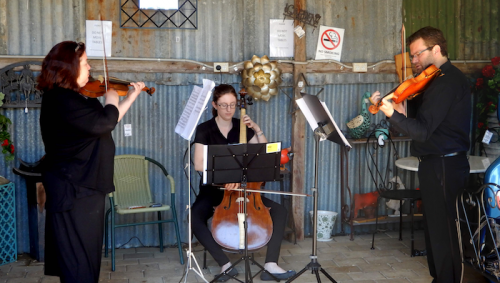 BAROQUE music can sound great anywhere, in a church, in a winery or two, and even in an old tin shed in a trading post.

Now in its third year, organised by festival director and owner of Rosnay Organic Wines, Richard Statham, “Baroquefest” hosted seven events over three days in the county town of Canowindra, just two and a half hours from Canberra.

The Song Company’s concert held at All Saints Church in Canowindra, titled “In the Midst of Life”, had music from Purcell, Monteverdi and Robert White (c1538-1574). The Song Company always do something interesting when arranging its programs. For this one, it picked the theme of death in the midst of life, and then positioned the music around that idea. And, as with all its performances, The Song Company’s sound is blended with a mixture of unique tonal beauty and professionalism.

The find of the festival was for me, The Academy Singers. Based in the Blue Mountains, The Academy Singers perform throughout NSW. Dr Paul Terracini led this choir, and also had pianist Jane Adino accompanying them on the day. Their concert titled “Ancient and Modern”, covered music from 1543 to 1983.

Its outstanding performance hit the heights, especially in Mendelssohn’s “Abschied vom Walde”, it transcended the music with insight and changing tonality. To end the concert, we heard the song cycle titled “Across the Dark”, by Australian composer, Ben van Tienen (1983 – ). The four songs had as text, the insightful words of Cartoonist Michael Leunig. Just like Leunig’s playful and quirky characters in his cartoons and writings, the music matched the spirited, light-hearted, and philosophical nature of his poetry and cartoons.

Other performances included Rachael Beesley on her Baroque violin performing a selection of early and recent music at All Saints Church on Saturday 14. The Limestone Consort at Wallington Winery with a range of Baroque music and the Muffat Collective at Rosnay Organic Wines as the last concert performing Bach, Corelli and others.

There was also a free concert of morning music on Sunday 15, which was held in the delightfully relaxing garden setting at Canowindra Trading Post, plus a meet the artists at Finns Store.

Baroquefest is one of only a couple of Baroque music festivals in NSW. As it grows, and I’m sure it will, considering some of the beautiful music played by these professional ensembles, setting aside one weekend a year to experience this unique festival in the relaxed country town of Canowindra, will be something to always remember.