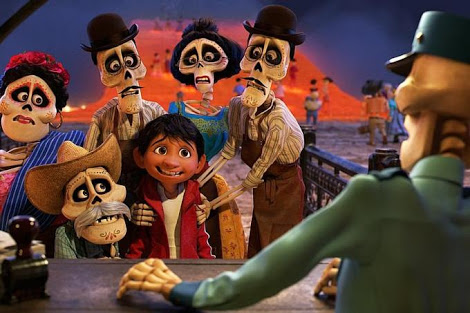 FOR its youthful target audience, “Coco” strikes me as a bit of a swizzle. It’s set in Mexico, where they speak Spanish and have a culture that percolates to the US carried by those border crossers whom the Donald wants to stop by building the world’s second-biggest wall after the Chinese one.

The plot unfolds on the Day of The Dead. Actually three days. Little Miguel wants to be a musician. After his musician great great grandfather abandoned the family, his granny made a rule forbidding music in the family home.

Miguel journeys to the afterlife world to get his ancestor’s blessing. The best laid plans of mice and men…

“Coco” runs for 105 minutes before explaining its title. Actors deliver its US-centric 21st century dialogue in pseudo-Spanish accents. It’s colourful, noisy animation which, if writer/director Lee Unkrich had filmed it as live action, might in time past have been the black-and-white B-movie for the first half of a double bill before interval and the feature that the audience had really come to see.

And unlikely that parents would take littlies to see it.

But “Coco” is an animation. From Pixar, a branch of Walt Disney Studios. And if it sails under the Disney flag, it must be okay for littlies, mustn’t it?

Wrong. Quite wrong. I watched it sitting beside a mother with daughters aged perhaps four and two who seemed often to lose interest. When it ended, the mother agreed with me about animated features.

Disney doesn’t normally release production cost information but industry sources estimate that Pixar would have spent around $US175 million making ”Coco”.  Opening in the US on November 26, it took $US50.8 million in its first weekend. Before its Australian release, it had taken $US503.8 million.

Nobody can define the age at which an animation might be within a particular child’s capacity to comprehend. I don’t use the criteria I found appropriate for “Coco” when evaluating every movie made for children. Many animations, particularly from Japan, display creative attributes which literate children should have no difficulty understanding.