SUSPENDED between the heaven of theatre studies and the hell of getting a job on the stage, a bunch of talented, young Canberrans have formed their own appropriately named company – Limbo Theatre.

They’re nothing if not ambitious and will kick off in early August with a production of Italian Nobel Laureate Dario Fo’s hilarious yet ferociously satirical play, “Accidental Death of an Anarchist”.

A rumbustious farce, the 1970 play was based on real-life events surrounding Italian railwayman and anarchist Giuseppe Pinelli, who fell – or was thrown – to his death from the fourth floor window of a Milan police station in 1969. But the characters in the play are fictional, with Inspector Francesco Bertozzo pitted against “the Maniac” who leaves the audience to decide on the ending.

“CityNews” caught up in Civic for a chat with three of the Limbo livewires, Nick Steain, Hayden Splitt and Damon Baudin, who describe themselves as “seriously silly”.

They’re all graduates or current students of the Canberra Academy of Dramatic Art in Fyshwick, whose performance wing, Honest Puck, has given them rehearsal and performance space and other industry support and advice.

The idea for the company came in a flash when Steain was studying “Accidental Death” at CADA and thought: “This is such a fantastic play, it’s dramatic, it’s funny and it deals with important issues.”

“The misuse of power is always a relevant subject,” Splitt says, as they reflect on their appreciation of the “fantastic language” used by the celebrated Italian playwright, who won the 1997 Nobel Prize in Literature.

“It’s a period piece but it’s timeless, and the events in the play could happen anywhere,” Splitt adds.

“The play resonated with the group,” Steain says.

“And it fits in with how we see ourselves as a company – comedic, but with a serious undertone. We keep the energy, it’s fast paced, but we don’t forget to ask questions.”

“Accidental Death” is familiar to Canberra audiences. In the 1990s Domenic Mico staged it along with other Fo plays at TAU Theatre, in 2005 Peter Wilkins staged it under the title “Cops and Ladders” and in 2015 Nicki Dudgeon directed it at Narrabundah College in a production full of the commedia dell’arte touches so loved by Fo.

“One of the things I love about it is the element of clowning, almost slapstick comedy,” says Baudin.

“There’s a lot of physical comedy relating to spatial  awareness.”

Limbo quickly found themselves a willing director in CADA teacher Clare Moss, who had taught the play to Steain – “she’s just a font of knowledge about theatre and philosophical movements like existentialism,” he says.

Splitt and Baudin have already graduated with the advanced acting diploma from CADA and have been getting plum roles with companies such as REP and Everyman Theatre. They’ve also auditioned and been engaged for a new professional ensemble being directed by Karla Conway at The Street.

All three list the many subjects that got them excited at CADA – Theatre of the Absurd, American theatre and Australian theatre, but are quick to mention other areas, such as including business skills, improvisation and dance – “You quickly find out what you’re good at,” Splitt says.

The model for the company is “all in together”, driven by a shared passion for the theatre. Steain’s idea from the outset was to be “proactive with careers, to utilise our skills… it’s a really exciting time for us, doing what we like to displaying our skills, giving enjoyment to other people, and putting our studies into practice”. 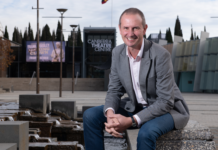 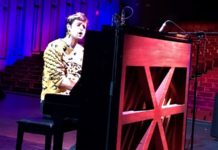