THANK heavens for Downward Dog – I could do it. Up, up I stretched with my thighs screaming in protest. My arms were quivering but I managed to hold the position for an interminable time; and then the teacher said: “Now we will go into Plank.”

She described this manoeuvre in the calming, encouraging voice of all yoga teachers but it was no good. “Oooomigooph!” I had collapsed on my stomach, my chi was unharnessed and I was now in a pose which could only be called Beached Whale.

Fortunately, I just missed knocking into the woman doing a perfect pose next to me and thereby avoided the toppling of the 10 other Plankers in my line.

Everything is deadly serious in a yoga session and anyway, you are completely focused on trying to get your left leg over your right ankle while looking over your left shoulder at your left arm which is reaching out as far as it will go while your right arm is, god knows where, flailing around trying to land somewhere. You aren’t interested in what others in the group are doing and anyway, you reach a certain age when you don’t get embarrassed anymore (except when you forget your daughter-in-law’s name).

There are various sorts of yoga and this morning I was doing Hatha which seemed as torturous as Dru, but I wasn’t sure of the difference; at least they all seem to have the 10 minutes of relaxation (savasana, meaning corpse like) before and after and that’s the best part.

You are supposed to clear your mind of everything but I can’t do that and am perfectly relaxed having a good think about important things such as will there be any pork fillet left at the butcher when this is over?

The whale music is soft and this teacher fortunately doesn’t talk all the time in Sanskrit with translation which is very annoying but they all talk a lot; it’s the ultimate religious power game really as the guru expertly leads her flock with hypnotic tones and strange language and everyone breathes through their left nostril or shoots their toes up in unison.

This was my second yoga session for the week and in the previous 10 days I had been to Curves (gym for women) and had tried trendy Pilates for the first time. We were at Tuross (Canberra-on-Sea) the small south-coast village where many forms of group exercise are on offer at the Community Hall for the mostly retired people who, like myself, were anxious to keep being well and alive.

A German, Joseph Pilates, developed his system of healthy exercise – Contrology – while interned on the Isle of Man during World War I. My class had 20 people including a few males and went for an hour with only a brief relaxation at the end.

As always, I was amazed at the limb contortions that can be achieved by the human body. The exercises for strength and flexibility seemed similar to yoga but easier. The teacher constantly moved round the group straightening and correcting and very gently assisted me get my right leg out of my left ear.

There was a similar emphasis on breathing properly but as usual, I was always exhaling when I should have been inhaling. At the end – as with the yoga sessions – I felt absolutely terrific. Rather like you feel after childbirth or when you finally get out of church on a sunny day.

Back in Canberra I returned to my three times a week sessions at Curves and decided that this form of group fitness suited me best. For one thing, you work at your own pace with nobody telling you what to do and the machines and running pads in between give you a very thorough workout. Best of all, it’s only 30 minutes from start to finish. Bliss.

But doing some yoga and pilates was useful because I learnt that while both are very worthwhile, you should pick one discipline, stick with it and get proficient. And it doesn’t hurt to attend classes with teachers from time to time to get your body working in different ways and your chi up and running.

After my 10 days of comparison, I felt virtuous, sore in the groin and immensely proud that not once had I farted in public! 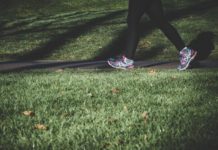 Why do women gain weight during menopause? 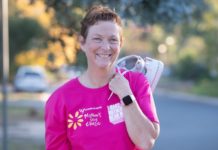 Deb takes to the treadmill to support the Classic