WHEN are the ACT voters going to get rid of Chief Minister Andrew Barr?

He has shown complete disregard, disdain and lack of respect for any residents over 40, he is “not interested in their views”, which is interesting as he is 45. If the over 40s are irrelevant then so is he.

He hates the journalists and “The Canberra Times” even though most of the time they supported him (contrary to what he claims).

He can spend $100,000 of public money on rainbowing the city just to promote the LGBTIQ vote for Same Sex Marriage, of which he had a vested interest. Yet as we read in  “CityNews” (March 29), the public toilets in Bowen Park, Kingston are a disgrace.

Also the health system is a disgrace, the nature parks and green space in and around Canberra are a disgrace.

He is spending many millions of dollars on the light rail and leases the CFMEU property back to the union for $1 a year after buying it for the ridiculous amount of $3.9 million of taxpayers’ money. 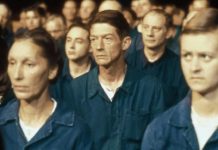