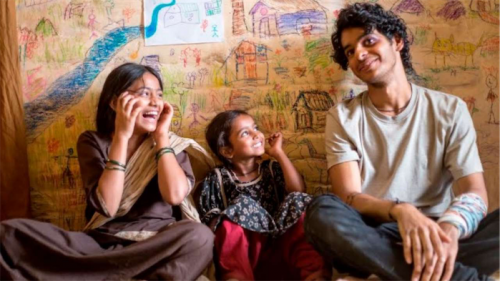 SINCE Iranian-born filmmaker Majid Majidi directed his first film in 1992, his narrative and documentary films have been nominated for numerous awards including Best Foreign Language film at the 1998 Oscars.

He may not be well-known in Australia but if “Beyond the Clouds” is a reliable benchmark, we might hope to see more of his work.

“Beyond the Clouds” is a gutsy drama set in Mumbai’s social underbelly. Amir (Ishaan Khattar) is a young, tearaway front-man for drug merchant Rahul. When one deal goes bad, he hides from pursuing cops in the apartment where his estranged sister Tara (Malavika Mohanan) lives.

In the dhobi-wallah quarter, Akshi (Goutam Ghose) lusts after Tara. She’s not having any. In the yard among the washed bed-sheets hung to dry, she defends herself against attempted rape by whacking him over the head with a rock. If Akshi dies, Tara will spend the rest of her life in jail. Amir feels compelled to have her set free.

Meanwhile, Akshi’s wife and her two young daughters are living on the street. In something of an epiphany, Amir brings them into his apartment to escape the rain. Poverty and concern for Tara’s welfare have driven him close to the point of no redemption. His dilemma will get worse before it gets better. And Rahul has sent two bully-boys to steal the older daughter for sale into the skin trade.

A purist might quibble at moments when a fiendishly detailed plot sends characters into situations that don’t add up, where in the hurly-burly of Indian street-life mothers send children outside while they receive customers, where petty theft is a norm, where the demarcation between law enforcement and the public finds no compassion or forgiveness.

Not a “nice” movie in the conventional sense, “Beyond the Clouds” tells a story of bottom-feeding Indian life with energy and acceptable credibility. It’s India without Bollywood production numbers, which has to be in its favour!

It has come to town with no warning. I don’t know how long it will run. I feel a certain admiration for the one cinema chain that has chosen to screen it.

CityNews - February 27, 2021
0
GUNS and knives have been found in a Civic hotel room by staff.