IN 1891, aged 43, former stockbroker, husband and father of five, artist with strong connections in a number of the revolutionary artistic movements of the late 19th century, impoverished French artist Paul Gauguin left France seeking an exotic locale that would be both inspiring and affordable.

Writer/director Edouard Deluc’s film, after a brief prelude exemplifying what Gauguin later bitterly castigates as a France full of faces and places too boring to paint, is a leisurely telling of his two-year first visit to French Polynesia and his relationship with the Tahitian girl-child Tehura (Tuhei Adams) and his friendship with the youth Onati (Teiva Monoi).

The film unrolls along a thread spun from significant moments in the man’s life, emotional turmoil, happiness, artistic discovery and frustration. The locations are interesting, although Deluc, perhaps wisely, spends little time looking closely at the islands whether in long shot or close up.

Vincent Cassel plays Gauguin with an ennui consistent with a diabetic. The two young islander characters are a continuing influence on his actions, Tehura never really explaining why she would agree to live with a man more than three times her age, Onati seeing him as a teacher instructing him in wood-carving techniques.

There’s evidence that Gauguin was not notable for his capacity to form ongoing friendships. The film ends with his 1893 return to France, before returning to the Marquesas in 1895 to paint many of the works that brought him posthumous fame before succumbing to syphilis in 1903.

I doubt that a line on a graph describing audience emotions generated by ”Gauguin” would show much upward movement but it may well exercise the curiosity of people seeking to discover the state or states of mind driving an artist. As if we could! 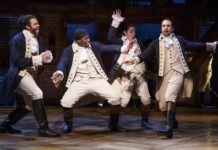