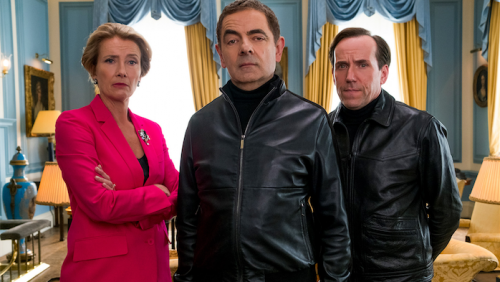 THE International Movie Database is often wobbly in the order it lists a movie’s cast. Its listing of the cast of director David Kerr’s feature debut begins with one of Britain’s most wonderful actresses, Emma Thompson, here in a supporting role as the Prime Minister and, in the process, strutting a breathtaking view walking away from the camera.

But the promotion for the film says that Rowan Atkinson plays the principal character.

I agree with IMDb, not the film’s promotion material. Atkinson is indeed one of Britain’s great comedians. Think Blackadder, Mr Bean. But William Davies’ screenplay serves him ill in this, the third film featuring gormless, analogue-age, secret agent Johnny English. I saw the first, missed the second and wished I didn’t have to see this one.

It’s a truism that movie sequels suffer from comparison with their predecessors. In this one, Johnny English is called out of retirement when somebody steals the top-secret details of every other one of MI7’s field staff. It’s a spoof of all of 007’s Bond films.

Fair enough. Every box-office success spawns sequels. Every success deserves a spoof. In the beginning was the word. Not this time. This flatulent mish-mash does no honour to any of what went into its production, especially the writing.

After a day seeing two commendable films, this one left me seriously disappointed.