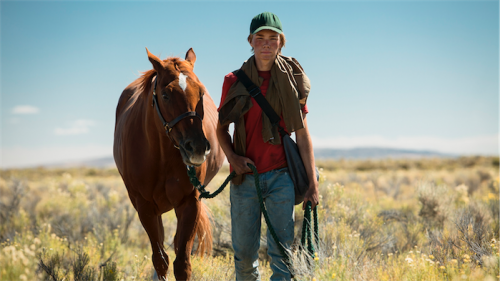 THIS low-key film written and directed by Andrew Haigh from a novel by Willy Vlautin may appeal to filmgoers interested in or curious about conditions beneath the underbelly of rural society in the US.

Charlie Plummer plays 15-year-old Charley, living in Portland, Oregon, with an unstable father whose wife has left them. Charley doesn’t want much – perhaps food, a home and a school where he can get a proper education. And his mother.

The film chronicles Charley’s odyssey across America’s great plains leading a slow racehorse. Getting the horse, named Lean on Pete, forms perhaps a third of the film, sharing it with trainer Del (Steve Buscemi) whose assets are a rig for carrying horses between meetings. Chloe Sevigny plays Bonnie, who rides them. Boy and horse form a bond.

Del tells Charley to deliver Pete somewhere that Charley learns is a knackery. Whenever they pass a pay-phone, Charlie tries to locate a woman in Wyoming whom he believes is his mother. When the pickup runs out of gas, Charley abandons the rig beside the highway and sets off on foot leading Pete. From that point, the film introduces a variety of social bottom-feeders whom they meet.

This is not your exciting big-budget movie full of excitement and colour. Its locations display the landscape with its beauty and its loneliness, not all that different from our outback.

It’s thoughtful in its examination of Charley’s monologues, a small dot moving across a wide space. It’s not particularly confrontational. But the folk whom he meets are real enough, a useful differentiation from the popular Hollywood depiction of them and therefore worth meeting.