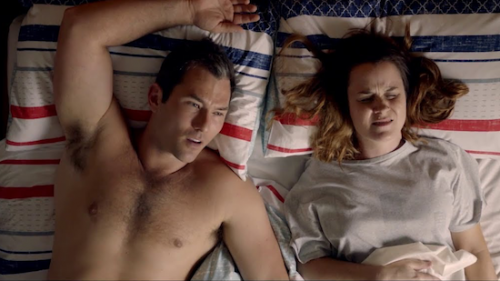 IN half a century of reviewing movies, I’ve left before closing credits from fewer than a handful of movies.

Add this one to the list. It’s the creation of producer/writer/director Marion Pillowski whose career in movie making has involved being a producer 18 times and writer/director on seven short films. On this, her first feature-length title, I sat for an hour waiting for something, anything, to hit the screen that might have persuaded me that “The Flip Side” offered anything to justify the average Aussie moviegoer buying a ticket to see it.

Returning from a comfort stop, the answer developing in my head since meeting Adelaide restaurant proprietor Ronnie (Emily Taheny) and her vapid hunk Jeff (Luke McKenzie) on the day that everything worthwhile in her life had vanished down the gurgler, burst into bloom.

Into each life some ray of sunshine must fall. What fell into Ronnie’s life that day was a message from British movie actor Henry (Eddie Izzard) into whose bed Ronnie had willingly climbed five years previously when she was caterer on location shots for a movie starring Henry. Oh, joy! Oh, rapture! Henry has returned to claim her after five years of silence? Fat chance. Henry is in Adelaide with French popsy Sophie (Vanessa Guide) in tow. And bed. His new movie is premiering tonight and he’d love to see Ronnie.

By this stage, my hope of getting anything worthwhile from the film had followed Ronnie’s life down the same gurgler. Later, when I came to write this piece, a memory surfaced. Only once before had I walked out of an Australia-made movie so devoid of merit.

By all means toddle along to check out “The Flip Side”. But don’t say you’ve not been warned.

CityNews - June 4, 2020
2
The ACT Greens is calling for deliberately false or misleading development applications (DAs) to be rejected immediately after developers continue to mislead the public about the developments going up in their neighbourhoods.