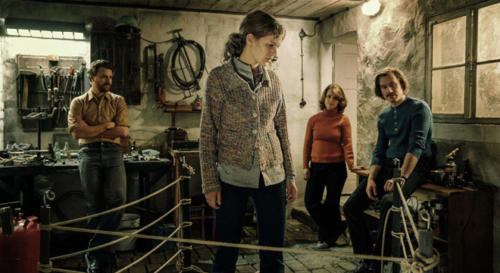 THIS out-and-out thriller sustains its tensions to the very end despite its denouement being a historical fact.

It’s 1979. In East Germany, the Ministry for State Security (aka Stasi with 91,000 regular staff and 174,000 informers) is a pernicious agency enforcing a closed society. Neighbours report on neighbours. Dossiers in Stasi offices record everybody’s behaviour. Dissent is just about the worst crime.

In Thüringen, the Strelzyk and Wetzel families have had enough of living under a totalitarian regime and decide to get out. What do they do? Build a hot air balloon and fly the coop. A brave decision, not easy to implement.

Director Michael Herbig and writers Kit Hopkins and Thilo Roscheisen put their heads together and made a movie telling how the two families did it, how close they came to discovery and who can imagine whatever horrors they would have experienced if the Stasi had found them out.

That’s “Balloon” in a nutshell, delivering an impressive accretion of tensions and close shaves on its way to a happy ending for the conspirators. Presumably, great nastinesses befell the local Stasi offices and Oberstleutnant Seidel (Thomas Kretschmann) who knew something was afoot but couldn’t put his finger on it until the flight was airborne.

Many fiction movies deliver escapism in varying doses. This one gives a fresh and possibly credible meaning to the word.

CityNews - January 22, 2020
2
RELIGIOUS grounds now give a cyclist in the ACT an exemption from wearing a safety helmet.