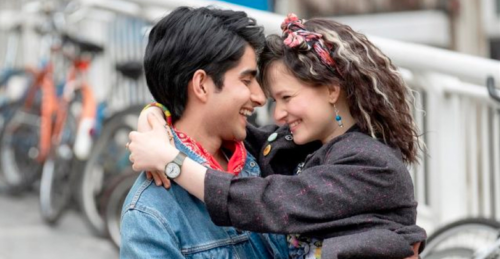 “BLINDED by the Light” is a joyous film that reaches its destination by combining adversity with determination, as any good drama should.

In the Midlands city of Luton in 1987, teenager Javed (Viveik Kalra in his feature film debut) knows that the sort of life that his Pakistani family is living is not for him. He’s good with words. He’d like to find a future as a writer. The heaviest obstacle in his path is his domineering father Malik (Kulvinder Ghir) who resents the frustrations of being coloured in a white community.

At school, teacher Ms Clay (Hayley Atwell) encourages Javed to write about what he feels. Then he becomes chums with Matt (Dean-Charles Chapman) who introduces him to the music and lyrics of Bruce Springsteen. This is a life changer for Javed. Emma (Kit Reeve) shares his passion for Springsteen’s work.

Remember “Bend It Like Beckham”? It was the creation of Kenya-born, London-raised writer/director Gurinda Chadha who named her production company “Bend It Films”.

With “Blinded by the Light”, Chadha combines messages about tolerance and determination into a film that’s fresh, quirky and affectionate. In one way, it’s a musical. It’s inspired by journalist and Springsteen fan Sarfraz Manzoor’s memoir “Greetings from Bury Park: Race, Religion and Rock ‘n’ Roll”. The title comes from “Blinded by the Light” in Bruce Springsteen’s 1973 debut album “Greetings from Asbury Park, N.J.”. Springsteen considers the song’s most important lyric to be the final line: “Mama told me not to look into the sights of the sun, but mama that’s where the fun is.”