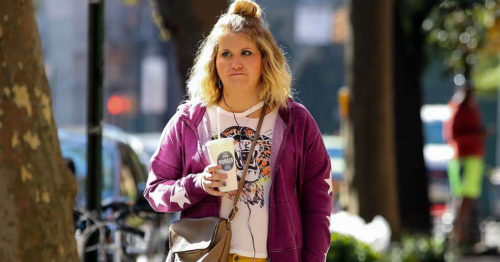 She’s close to becoming an alcoholic. To put it kindly, she’s carrying more weight than is good for her. Her life is about good times. In the privacy of her apartment, her self-esteem is shot. And she’s broke.

A new GP she visits to get a prescription for Adderall sends her out with not pills but advice – lose weight. A neighbour persuades her to run the excess mass off.

In his feature debut, writer/director Paul Colaizzo has provided Jillian Bell with a role that lifts her a few rungs up the professional ladder after a career mostly in TV series and a few bit parts in feature movies. The role of Brittany may not seem to justify or demand great talent but she is good at what she does (she and Colaizzo also have executive producer credits).

After finishing her first mile, Brittany sets an almost unthinkable goal: running in the New York City Marathon (this was the first time a non-documentary film crew was allowed to shoot there; Bell reportedly lost 18 kilograms during the shoot).

“Brittany Runs a Marathon” mixes comedy and message with a plea for tolerance of Brittany’s problems and a hope that she will find resolution of them. However, she’s an obverse of Polonius’ advice to Laertes – “Those friends thou hast, and their adoption tried, Grapple them to thy soul with hoops of steel” (Hamlet, Act 1, scene 3). It’s hard to like her. Potential viewers might be justified in wondering whether she warrants patronage.

CityNews - January 23, 2020
0
PEOPLE in Beard, Oaks Estate and West Queanbeyan (including Crestwood) have been told it's too late to leave and that the Pialligo Redwood Forest fire poses a threat to all lives in its path.