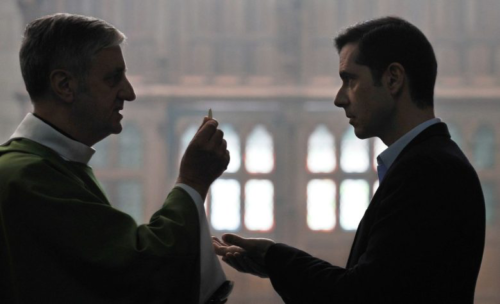 FRENCH filmmaker François Ozon has made a powerful and timely film telling how a movement grew to bring justice and emotional solace to the victims of a French paedophile priest and illuminate the ostrich-like responses of the Catholic Church’s upper hierarchy whenever such cases came to their attention.

This is not the place for a brief history of priestly celibacy, nor does Ozon suggest that rule to be the underlying cause of the sexual abuse of children by ordained priests. But I do consider that it has been a significant element of the misery, pain and emotional unwellness of perpetrators and victims alike. Ozon’s screenplay pretty much aligns with those criteria.

“By the Grace of God” is a dramatic treatment of real, indeed, still current, events leading to the 2019 conviction of Cardinal Barbarin (François Marthouret) of Lyon for concealing the conduct of Father Bernard Preynat (Bernard Verley). It opened in France in December 2018. The version screening here has been updated to an unspecified date in 2019, before the Vatican defrocked Preynat.

In 2014, Alexandre Guérin (Melvil Poupaud), a respected banker and devout Catholic, discovers that Preynat, who he believed to have been defrocked for sexually abusing him, is not only still a priest, but is still working with children. Shortly after, François Debord (Denis Ménochet) who also claims to have been abused by Preynat contacts Alexandre. Now a militant atheist, François has formed an advocacy group which he hopes will be able to stand against the church and see Preynat not just defrocked, but criminally convicted.

Ozon’s film is sparse, dramatically gripping, even-handed in describing events and attitudes. Its documentary feel delivers a credible intertwining of characters and issues, of conflicts and tensions. Its 138 minutes provide more than simply entertainment.