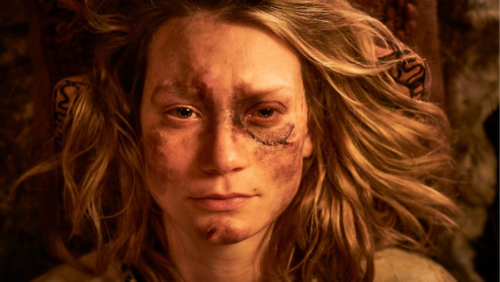 BRAVO, Mirrah Foulkes, for her feature film debut writing and directing this amusing, challenging and mildly didactic compendium of comedy, drama, social and cultural prejudices and reflections on what passed for public entertainment in Britain since 16th-century Italian commedia dell’arte arrived there in 1663, packaged in enough violence, cruelty and social division to satisfy moviegoers’ most bizarre enthusiasms.

And for presenting its Australian locations looking like 17th century England.

Judy (Mia Wasikowska) has gone off to do the week’s marketing in the inland village of Seaside, leaving her husband Punch (Damon Herriman) to care for their infant daughter. The family’s profession is puppetry. And Punch is the master.

Before leaving, Judy has made Punch swear to take care of the little one and forswear strong drink in any form during her absence. Poor trusting girl. By the time she gets home with the shopping, the baby’s been tossed out of an upstairs window and Punch is close to paralytic drunk. And before much longer, Judy has been given a terrible walloping by Punch’s walking stick, to be dragged off into the forest and buried beneath last autumn’s fallen leaves.

Does this sound unsuitable for kids? I suspect that older kids will like it a lot. Parents after seeing it (the MA classification insists that kids may not do so without an accompanying adult) may disagree. Everything turns out well for Judy in the end. Punch’s comeuppance is no less than he deserves.