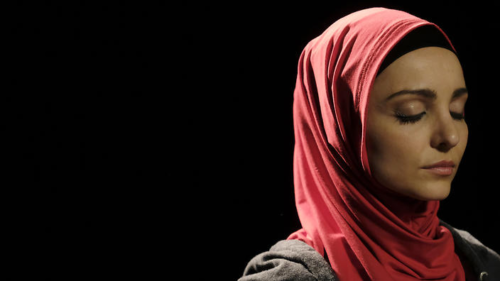 PARTHO Sen-Gupta. A name quite unfamiliar to Australian cinephiles. But it seems likely that if he stays in Australia, he’ll become better known to us.

“Slam” is his third film as writer/director. It’s topical, provocative, credible, a compelling example of movie-making craft, above all, in this anxious era of Islamic confrontation, challenging. These elements will reward filmgoers valuing cerebral stimulation no less highly than mere entertainment.

Sydney café owner Ricky (Adam Bakri) is a Muslim refugee who has assimilated well into Australian culture. In contrast, his sister Ameena (Danielle Horvat), a hijab-wearing, politicised slam poet unafraid to air her views about Australian society, has vanished, possibly after appearing on TV reading a resounding reminder of what Muslims have contributed to Australia.

The poem, which the late Australian spoken-word poet Candy Royalle wrote specially for the film, is a cracker deserving wider promulgation, a confronting, savage and poignant reminder that the lands that millennia ago cradled European civilisation, we nowadays call the Middle East.

It falls to Senior Constable Hendricks at Bankstown Police Station to lead the search for Ameena. Delivering what becomes the film’s principal dramatic thread, Rachael Blake’s performance of Hendricks achieves as high a pinnacle of the acting profession as any filmgoer might wish ever to see.

Without proselytising for Islam, “Slam” equitably observes people of whatever faith in a society that embraces all the known faiths and those recently invented for questionable reasons. Ricky’s pregnant wife Sally (Rebecca Breeds) was born a McLeary, which is more than a token statement of assimilation.