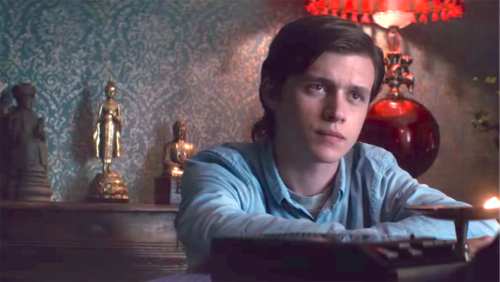 I’VE not read the John Searles novel adapted by Eric Garcia on which Anglo-Indian director Rowan Athale based his second feature.

The result of their joint labours is rather a curate’s egg in three acts, a middle-class melodrama about love, death and domestic conflict, delivered in a modicum of willingly-suspended disbelief.

Two days after the story’s real meat begins, a prologue introduces Philip (Nick Robinson). He needs crutches to get about. His parents (Charlene – Amy Ryan and medico Richard – Greg Kinnear) are divorced. But the main shadow over the family is the death five years earlier of older son Ronnie (Connor Jessup).

Charlene answers a ring at the door. The visitor is Melissa (Margaret Qualley) and she has a surprise. The 39-week-old bun in her oven, she insists, was put there by Ronnie. Charlene doesn’t believe it. And neither should we.

Melissa works behind the counter of the hardware store run by retired cop Bill (Brian Cox). Bill’s principal sin is cigarettes, which he hides from loving wife Gail (Blythe Danner) by stashing them behind the washing machine in the basement.

The principal characters are now laid out before you, the readers. By and large, the acting is okay, especially Brian Cox.

The plot is a little short of film noir, compensating for that stylistic omission by being long on cliché and improbabilities. The best, the most improbable of the latter, develops in the events leading not to the fertilisation of Melissa’s ripe ovary but to the events leading to Ronnie’s death. Can the average filmgoer overlook those qualities? I blame the limo driver bringing Ronnie and Melissa home after the prom. It’s up to you.