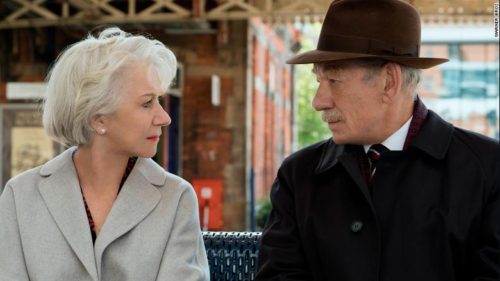 TO get the most from Bill Condon’s film adaptation of Nicholas Searle’s novel, it’s helpful to be aware that its denouement embodies a sort of reverse McGuffin (an object, device or event that serves to keep the plot in motion despite usually lacking intrinsic importance).

All I’m prepared to tell you is that it’s a beaut and knowing that much about the story will be beneficial to watching it. At least, that was what I was feeling as I watched conman Roy (Ian McKellen) preparing to swindle Betty (Helen Mirren) of all her funds and possessions.

I knew that Betty had a McGuffin up her sleeve, but not what form it was going to take. That knowledge sharpened the tensions growing in me as I waited for it to burst out and reveal itself. And I hope that knowing this much will do the same for you.

“The Good Liar” unfolds in 2009. It begins on an internet dating site. It starts to coalesce when Roy meets Betty for the first time in a restaurant. Both are in their seventies. The friendship grows. She’s not on for a sexual romp; he doesn’t press her. She allows him into her house after he falls over. Stephen her grandson (Russell Tovey) doubts the wisdom of such a concession toward a stranger. As well he might, because Roy and his accountant pal Vincent (Jim Carter) are building a big swindle against a quartet of equally bent investors.

That much of the plot will, I hope, sharpen your appetite for what is a quite delightful, intense combination of thriller and romantic styles. You will be in the presence of two of British cinema’s greats each in top form. McKellen is just on the credible side of seedy. Approaching her mid-70s, Mirren is luminously lovely as a generous and mysteriously simple woman who asks little for herself.

“Vengeance is mine, saith the Lord” (Deuteronomy 32:35). And it’s a dish best served cold. Enjoy.