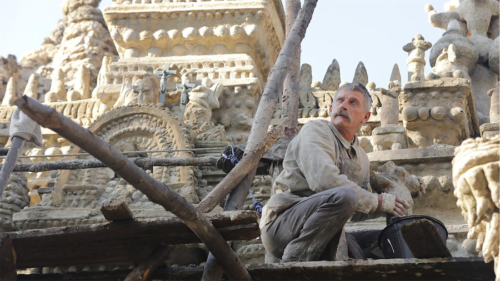 After his wife died, their seven-year old son Cyrille was taken away for grandparents to raise. Cheval met Philomene (Laetitia Casta). They married. In her early teens, their daughter Alice died from a respiratory ailment.

But not before she had been Cheval’s helper on a project that dominated his life from 1879 to 1912.

On his delivery walks, he found a strangely-shaped stone that redirected his destiny. On land that Philomena’s dowry brought to the marriage, he fixed river-washed stones with home-made mortar into a wondrous, simple, palace for which he alone understood both design and raison-d’être.

Gamblin’s slow, methodical performance of Cheval is memorable for those qualities. Laetitia Casta is a strong, limpid beauty whose portrayal of Philomena matches it with very few words. The cinematography makes marvellous use of light and colour to convey the feeling of the narrative.

In 1969, Cheval’s creation was declared an officially-protected French cultural landmark open to visitors every day except Christmas Day, New Year’s Day and January 15 to 31.

In 1986, Cheval was put on a postage stamp, a fitting memorial to a man who walked nearly 230,000 kilometres delivering mail for 10 hours each working day then spent 10 hours cementing river stones into his building!

Will you like “The Ideal Palace”? Answering that depends much on your expectations.  Certainly, it doesn’t shriek “blockbuster”.

Nor does its atypical message insist that the filmgoer like it. A film can be enjoyable as well as hard to like. “The Ideal Palace” does both rather nicely. And there’s a neat synchronicity about its being screened in the only Canberra cinema called “Palace”.