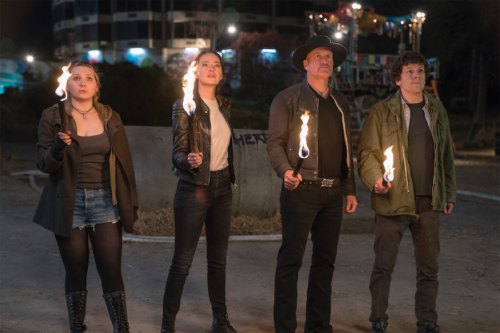 ONCE again directed by Ruben Fleischer, this sequel to ”Zombieland” (2009) has the same principal characters played by the same actors (Woody Harrelson, Jesse Eisenberg, Emma Stone and Abigail Breslin) with the same zany flavour.

And if it’s possible, a more clever, over-the-hill continuation of what may have begun as a spoof but has risen from the grave to join the vanguard of a cinema genre tasting more than a little of the past, when horror knew its place among the general panoply of movie genres. Which, in the era of double features, was the B movie.

However, no B movie in history had an estimated budget of $US42 million. And we are seeing this sequel too early in its worldwide release for information to trickle down the line telling how it’s doing. But if I were a betting man, I’d put a few bucks on its going into profit within a mere couple of weeks.

Both funny ha-ha and funny peculiar, it might help if you saw the first one but narratively this sequel stands alone.

The screenplay, again by Rhett Reese & Paul Wernick, delivers a futurist road-movie story garnished with lampoons of a lot of big box office hits, the Americans love of the world’s biggest everything whether good, bad, indifferent, worthless, valuable or dross. And the sharp ear might discern portents of a sequel.

Imagine, as an example of its wackiness, a planet laid waste by whatever wars or other man-made disasters, including relocating the Leaning Tower from Pisa to mid-western US and there dropping it on a horde of ravening zombies.

And I’ve recently seen a trailer for a coming Australian zombie movie, “Little Monsters”, memorialising all the children who have died too soon.