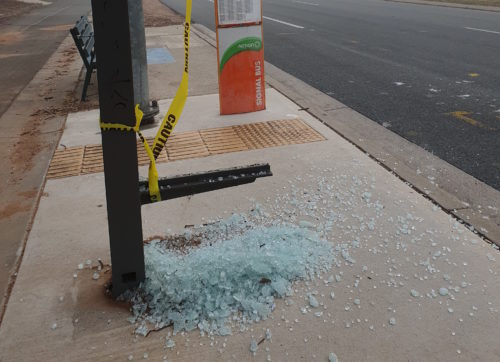 POLICE are calling for information on the vandalism of glass panels at bus shelters after about 50 have been damaged across Canberra.

The call for information follows a story published on citynews.com.au last week about bus shelters being vandalised in Canberra’s south.

In the story, Panduka Senanayake reported that vandals have targeted bus shelters on Athllon Drive, between Greenway, and Tuggeranong and Hindmarsh Drive in Woden.

Police have now come out and said they believe the damage generally occurs overnight, and is caused by a projectile being fired from a sling shot or other projectile device.

Police would like to remind those responsible that these acts are not harmless fun – they are criminal offences costing thousands of dollars to repair, saying offenders could face serious penalties including fines and/or imprisonment.

oOh!media Limited, an Australian outdoor advertising and media company responsible for the maintenance of the new bus shelters has informed the office of the Minister of City Services, Chris Steel, the replacement cost of each pane, which provides commuters some protection from the wind and rain, would be around $1000.