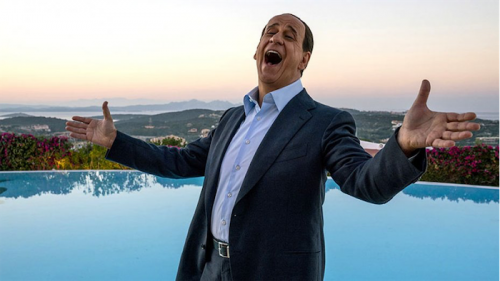 WRITER/director Paolo Sorrentino has made a curate’s egg of a biopic about a very rich man who achieved world fame by the way he dabbled in Italian politics.

Watching it, you might be forgiven for thinking about a notorious New York tower block and a failed nickel refinery in Townsville. Comparisons are said to be odious. But not this one.

“Loro” (Italian for “them”) presents several groups of people to whom that collective pronoun might apply. At the top of the pile was Silvio Berlusconi, the media tycoon who served Italy as prime minister in four governments. Toni Servillo, made up to closely resemble Berlusconi, plays him convincingly.

“Loro” might have made its point more pungently if it had spent more time analysing Berlusconi’s legacy to his country.

It may surprise folk who know my views about feminine beauty to see me admitting to having become bored by its constant parade of luscious young women showing acres of bare skin in roles involving only a handful of them speaking scripted lines to camera.

Those sequences make a point about Italian men’s attitudes toward women (probably men in most countries) and the lengths that women go to seeking glamorous lifestyles. They decorate the screen and the scene for a high proportion of the film’s 151 minutes mostly to provide a background of seduction, glamour, drugs and raucous poolside parties against which its major themes of corruption and business manipulation unfolded.

The rest of the film examines Berlusconi the tycoon and sybarite. Its most powerful passage comes during the final quarter, when his second wife Veronica (Elena Sofia Ricci) gives him the rounds of the house in announcing her intention to divorce him. The writing’s perceptive, the two performances are powerful. Sub-plots sprinkled through the film deal with people seeking preferment or commercial favours for which they are willing to roll over and submit to various indignities.

Berlusconi, now aged 82, is eligible this year to stand again for public office. Sorrentino refused his offer to make houses available as authentic locations for the film.