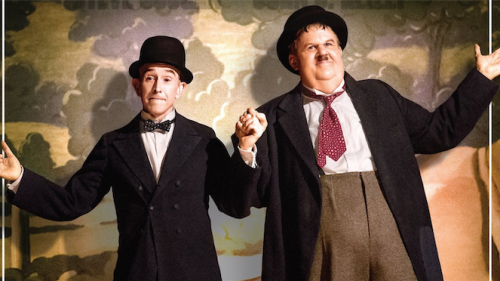 PAY no attention to reports of historical inaccuracies in director Jon S Baird and writer Jeff Pope’s film memorialising the two prolific comedians whose careers together (32 silent shorts, 40 sound shorts and 23 features) bridged from a short silent comedy in 1927 until their last film at the end of 1944.

“Stan & Ollie” has bravo performances from Steve Coogan as Stan Laurel and John C Reilly as Oliver Hardy. The plot follows a short prologue introducing the pair on the set of a 1931 potboiler trying to get their salaries raised to match the worldwide fame and box-office wealth they garnered for producer Hal Roach.

The film’s main body is the 1956 tour of Britain and Ireland on which the pair tried to re-establish their reputation. Its reproduction of streetscapes, cars and trains looks pretty good. Sequences showing promotional occasions satirise British middle and upper-class pomposity. A continuing thread involves British impresario Bernard Delfont (Rufus Jones) engaged to manage the tour but more inclined to feather his own nest.

Stan and Ollie had their wives along on the tour. Playing Stan’s wife Ida, Nina Arianda gives a sharp woman’s comic take to what was going on. Billed before Stan in the credits, and rightly so, pint-sized dynamo Shirley Henderson plays Lucille Hardy.

In a TV interview, John C Reilly told of three hours applying prosthetics and make-up to become Ollie every day on set and an hour at day’s end having them removed. The resemblance doesn’t end there. The voice, the subtlety of movement and delivery of dialogue, are both spot on. Steve Coogan has Stan’s features and gestures down to a “T”, writing the pair’s dialogue and physical gags.

I liked “Stan & Ollie” a lot. It invoked childhood watching the first half of many a Saturday matinee before the cowboy movie that mostly followed. It reminded me of the Laurel and Hardy cartoon strip in “Film Fun”. I guess much of today’s population isn’t old enough to have had such happy experiences. “Stan & Ollie” does them a service by showing the more innocent age of movies that preceded today’s DIY media overkill that makes every kid with a smartphone a potential Oscar winner.