The assertion by ACT Justice Minister Shane Rattenbury that he and his prison authorities were kept in the dark about the prosecution and imprisonment of Canberra’s ‘secret prisoner’ strengthens the appeal by ROBERT MACKLIN, who broke the story nationally, to have the minister cover ‘Witness J’s’ ACT court costs.

THE last thing a journalist wants is to become part of the story he or she is writing.

Once that happens you lose the authority that derives from the role of impartial observer. Indeed, you can easily find yourself becoming an advocate for one side of an issue, activity or person caught in the media headlights.

So it is with my story of Witness J (Who is Canberra’s mysterious ‘secret prisoner’?), the former defender of Australia’s interests in uniform and who ran afoul of the Intelligence Services Act 2001.

As we now know, he was tried in secret in Canberra’s Supreme Court and sentenced to 15 months in the Alexander Maconochie Centre (AMC). And though there was never a question of his own such behaviour, he was housed in a pod reserved until then for sex offenders, cheek by jowl with some of the worst of their kind.

He took the opportunity to fulfil medical advice he’d received for the stress he had undergone in his career to write a book about his experiences while incarcerated. And importantly, the then general manager of the AMC, Ian Robb, was well aware of his literary activities.

Then two things happened – Mr Robb departed for greener fields, a new GM took over and shortly afterward Witness J finished his book and sought advice from an experienced author on the process of getting it published. That is when I came into the story.

I’d never heard of the man. He was only allowed to email a select few, one of whom was his brother and it was through him that I was invited to visit the person the government had designated “Alan Johns”.

The new GM, Ms Corinne Justason, noted my application and informed the Federal Police of the suspicion that I was an author. True enough, I had written 29 books (most recently “Castaway”, which I’m thrilled to report won a Canberra Critics Circle award this week).

The AFP then raided Witness J’s cell and his brother’s home to confiscate the manuscript. And for a time his email access was restricted.

Witness J was outraged, took a civil action, representing himself against the ACT government which Justice Burns found wanting in a judgement delivered at 4pm on Friday, November 8. I attended and received a copy of it from the hands of Witness J.

That night I wrote the story and editor Ian Meikle published it in “CityNews” a few days later.

But there is one important detail I left out. Justice Burns also awarded costs against him. Witness J, now a free man but without a job or the prospect of one, was required to pay what would be a very substantial amount for the government’s legal bills.

In the body of the court, Witness J appealed against the ruling but Burns J quite properly ruled that he’d have to approach the ACT lawyers to see if they would waive the costs.

And here, alas, is where I become an advocate: I truly believe it’s the very least they could do.

They bowed to the Feds and tried him in secret, sentenced him in secret and penned him secretly with some of the most abhorrent members of the human race. And now he’s back in the world wondering where to turn. So, please, Minister Shane Rattenbury, have a heart.

NB: There is, however, a hopeful note. I understand that the inspector-general of Intelligence and Security, Margaret Stone, has instituted an official inquiry into the larger matter. We do live in Australia after all.

Letters / What is it, Minister, you don’t want us to know? 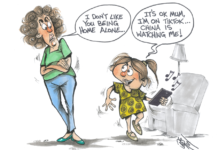