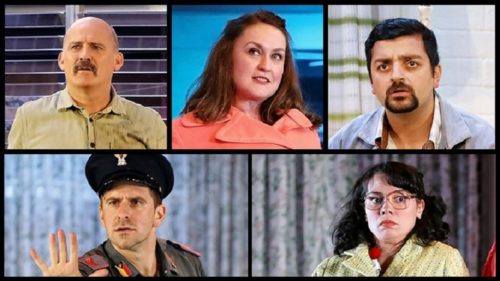 SYDNEY Theatre Company’s cast will reunite to perform a full live-streamed reading of Marieke Hardy’s adaptation of Dario Fo’s hilarious political farce, “No Pay? No Way!” which was prematurely cut short due to the public health crisis. After a day of re-rehearsal, the cast and crew will raise the virtual curtain at 7.30pm this Thursday, May 28. Ticket prices range from $5-$25 based on how much people are able to pay. A recording will also be available on demand from May 29 to June 3. Visit sydneytheatre.com.au

THE National Film and Sound Archive has released a 21-second clip featuring Benjamin, the last known thylacine (or Tasmanian tiger). Taken from the travelogue “Tasmania the Wonderland”, the images, shot in 1935, are thought to be the last ever filmed of Benjamin, months before his death in 1936. It is viewable at nfsa.gov.au

MEANTIME, Stephen Harrison’s show “The Blue Thylacine: ink and wash drawings and sculptures” continues online at Helen Stephens Gallery. “These drawings could be about all extinct animals, especially the ones that have died due to human interaction,” Harrison says. A “live” day will be held at the gallery, 39 Murray Street, Collector, 1-4pm this Sunday, May 31, with visits staggered.

BELCO Arts (Belconnen Arts Centre) is introducing online workshops in June, with “Portraits in Watercolour” with Shan Crosbie, suitable for beginners and experienced painters, online at 6pm on Wednesdays from June 10-July 15, and “Writing from the Heart” with novelist, mentor, editor and manuscript consultant, Kylie Fitzpatrick, at 6.30pm on Thursdays, June 11–July 2. Costs apply. Details at belcoarts.com.au

SELBY & Friends “At Home” series this week features a performance of “Quartet Movement for Piano, Violin, Viola and Cello in A Minor” by Gustav Mahler with Elizabeth Layton (violin), Glen Donnelly (viola), Julian Smiles (cello) and Kathryn Selby (piano) from the 2012 program “My Song is Love Unknown”. View on youtube.com

CityNews - July 7, 2020
0
An L-plater has been caught driving 18km/h over the speed limit after the driver's mum encouraged the learner to overtake motorists that were "driving dangerously" on Adelaide Avenue.